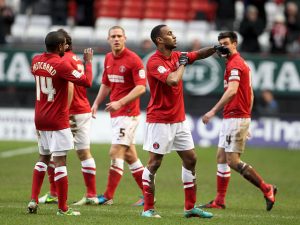 Ten man Charlton held Derby County to a draw on Saturday in a thrilling game at The Valley. They had gone ahead through a Danny Haynes wonder-strike but were pegged back by Nigel Clough’s Rams with twenty minutes to go as Jamie Ward coolly converted from the spot. The Londoners could have lost it all minutes from time, but Ben Hamer and the woodwork kept Derby at bay and gave Charlton their first point in four matches.

Chris Powell decided to freshen his side up, and made five changes to the starting eleven. Down the left hand side, Cedric Evina was given a start, and Johnnie Jackson came in up ahead of him after sitting out the Boxing Day clash with Ipswich Town. Over on the right, Lawrie Wilson made a return to the starting eleven, with Bradley Pritchard being re-installed in the centre of the park, with the Frenchman Yann Kermogant handed a place alongside Haynes up top. Finally a special mention must go to Chris Solly, where the ever present defender made his 100th appearance for the club at right back.

As the game got underway it was clear that the key to success would be to have control of the midfield. Derby’s young starlet Will Hughes was someone who the Addicks knew they had to keep a close eye on, but the first act of his afternoon was picking up a caution after a reckless lunge on midfield opponent Pritchard. The bleach blonde teenager is being linked with a number of Premier League clubs as the January transfer window approaches, and he  was brought down by Micheal Morrison moments later after he was at the heart of a free flowing Derby move. The central defender picked up a yellow card to leave the card tally at one a piece in the opening ten minutes.

Ben Davies stepped up to curl the resulting free kick towards goal, but he was denied by Ben Hamer who was to make his first save of many during the afternoon. Shortly afterwards, Davies stood over another set piece far out of the left hand touchline, and whipped in another dangerous ball. Luckily for the home side it sailed all the way through for a goal kick as Charlton struggled to get going.

However almost out of nothing the home side took the lead, and in spectacular style. There seemed to be nothing on as Danny Haynes collected the ball down the left hand side after exchanging passes with strike partner Kermogant. The former Barnsley man cut inside and unleashed a wonderful strike that flew into the top right hand corner with Derby keeper Adam Legzdins stranded in the centre of his goal. It wasn’t the first time this season the Rams have been on the receiving end of a Goal of the Season contender, and this strike will certainly rival Danny Green’s at Pride Park come May.

The lead could have been short lived as sloppiness in possession allowed Paul Coutts to run at the heart of the Charlton defence. The midfielder went on a surging run before squaring the ball to Theo Robinson in the middle. On hand was Hamer to block the initial effort and then do even better to thwart the striker at the second time of asking to keep his side ahead.

Danny Haynes was forced to leave the field just after the half hour mark as the striker injured his hamstring after chasing a ball down the right. He left the field to a standing ovation and rightfully so, but it meant the Addicks were down to ten men for a period of time and Hamer had to be alert to deny Nathan Tyson after the pacy striker had sprung clear of the home back line.

Yann Kermogant won his side a free kick shortly before half time, and he flicked the ball on from the resulting set piece into the path of Micheal Morrison. The towering defender headed wide though as a big chance for Charlton to double their lead wasn’t taken.

There was no let up in the Charlton pressure and the home side were presented with another chance just before half time. This time the marauding Lawrie Wilson sped clear down the right and delivered a low cross that was just too far ahead of both Kermogant and Pritchard as the Addicks went in ahead at the interval.

Charlton had good chances after the restart, the first falling when Bradley Wright-Phillips’ persistence ended with him crossing to Jackson who couldn’t head the ball past Legzdins.  The second was from a more unlikely source, as Cedric Evina’s powerful drive was tipped over the bar by Legzdins as the Addicks pushed for that all important second goal.

Dale Stephens was at the heart of Charlton’s forward play all afternoon, and after he found Jackson the skipper fired towards goal and as the shot took a deflection it looked as though Legzdins was beaten, but the keeper did well to parry the ball away.

The best move of the game followed as the clock reached 70 minutes. Quick thinking from Hamer sent Solly away down the right. The full back found the on rushing Wright-Phillips in the centre who in turn spread the ball down the line to Kermogant on the left. As the move reached its climax the ball fell perfectly for Pritchard six yards from goal but the lovable midfielder could only watch in agony as his shot bounced off the underside of the bar and into the grateful grasp of Legzdins.

That miss was to prove costly as Derby found themselves a route back into the game. A corner from the right sailed past everyone, but Morrison brought down John Brayford to leave the referee with no choice but to give him his marching orders having already been booked. Jamie Ward stepped up and fired the ball straight down the middle of the goal to break Addicks hearts and draw his side level.

The game had suddenly changed and Dorian Dervite was brought on in place of Dale Stephens as manager Chris Powell attempted to preserve a point. Hamer was the man in the spotlight again as he produced another outstanding double save, first denying Robinson for the second time in the match, and then doing likewise to his strike partner Conor Sammon as the crowd voiced their appreciation.

A Derby corner was swung in from the right in similar fashion soon after, and John Brayford’s header came back off the post as the Addicks kept the Rams at bay. Up the other end, the tireless Pritchard saw his shot loop wildly into the air after being blocked, before Jackson could only head the ball straight at the keeper as it came out of the sky.

One last hurrah from the away side was met with tremendous blocks from both Leon Cort and Dorian Dervite at the death and Charlton held on to salvage a plucky point. The result somewhat stops the rot for Chris Powell’s men and they can go into 2013 knowing that if they can repeat the spirit and determination that was evident in this performance on a weekly basis they won’t go far wrong.