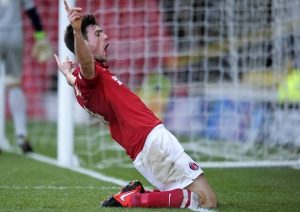 The skipper celebrates his goal

Johnnie Jackson was the star of the show on Tuesday afternoon as Charlton triumphed 4-3 over a strong Watford side at Vicarage Road. The skipper led by example in what was his 100th appearance for the Addicks in an action packed encounter and helped his side to claim their first victory since November. Charlton fell behind twice in the game but roared back on both occasions to seal a superb victory.

Chris Powell made two changes to the side who had played out a 1-1 draw with Derby County three days earlier, with Dorian Dervite and Ricardo Fuller coming into the starting line up in place of the suspended Michael Morrison and the injured Danny Haynes. Otherwise, the side remained the same as Powell’s men went in search of a vital league win against a strong Watford side.

It was the away side who made the brighter start to the game in the day’s early kick off. Striker Yann Kermogant tried his luck from the edge of the area after collecting a pass from Chris Solly, but Manuel Almunia saw the ball wide of his post. The Frenchman had another chance shortly afterwards as a scramble in the area resulted in the ball falling to the feet of the front-man  but he couldn’t capitalize on some half hearted Watford defending

Then with their first shot of the match the home side took the lead. A neat pass by Nathaniel Chalobah was collected out on the right by Alex Geijo, and after Ben Hamer did well to stop the shot, he could only parry the ball into the path of the on rushing Daniel Pudil who neatly tucked away the rebound to put the Hornets in front.

A sucker punch for the Addicks, but it seemed to galvanize the side as they went in search of an equalizer  This time Ricardo Fuller was the danger, and he did well to collect from Jackson’s through ball and get a shot away on the turn, however Almunia was equal to the Jamaican’s effort and saved well with his legs.

Controversy followed soon after as Forestieri – who had been sent off at The Valley back in October for simulation,  handled the ball to take it away from Hamer and put him in on goal. Luckily referee Trevor Kettle was wise to the Italian’s ‘hand of god’ attempt and cautioned the striker.

The same fate was to follow for Jackson down the other end as he powered his way into the box through a crowd of defenders and tucked the ball home. But Kettle cautioned the Addicks skipper as he was accused of the same in the build up.

But Charlton weren’t to be denied the next time they came forward and were soon back on level terms. As a Jackson corner was whipped in from the right, Watford defender Joel Ekstrand diverted the ball back into his own net in bizarre fashion.

Suddenly the impetus was with Charlton, and they began to press on and go in search of the goal that would put them ahead. Sure enough, they were rewarded. After Cedric Evina had done well on the left, his clever lay off found Pritchard on the run who centered delightfully and an outstanding move culminated in Kermogant heading the ball home.

Fuller had two further chances to add to the lead before half time, but his first found the side netting and the second failed to trouble Almunia. As the half time whistle blew the Addicks were given a standing ovation as they made their way to the dressing room at the interval.

Watford started the second half the stronger and Hamer had to be at his best to keep his side ahead shortly after the break. Forestieri and Geijo combined in sublime fashion before the former saw his effort stopped at point blank range by Hamer. Up the other end, Lawrie Wilson provided an inviting low cross, but there was nobody to take advantage of some more suspect defending from the home side.

Forestieri had caused Charlton problems all afternoon, and he won his side a penalty seven minutes into the half. Dervite was in close attendance but couldn’t deal with the fleet footed forward as he jinked his way into the area and went down after pressure from the Addicks defender. Responsibility was given to Almen Abdi who coolly slotted away the spot kick to level the score.

Once again, Charlton did not let the goal effect their confidence, and they could have gone ahead again almost immediately.  A wonderfully weighted chip from Kermogant provided Jackson with a glorious opportunity, but just as he pulled the trigger Almunia came rushing out to foil the captain.

In a game that will be remembered mostly for goals and attacking drama, there were a few incidents that can’t go without a mention. One of these came when Watford centre back Neuton made a mockery of himself and did his side’s reputation no favors at all when he went down in bizarre fashion. Fuller and the defender had barely touched, and there really appeared to be nothing in it as the two merely brushed past each other, but the Hornets defender went down like he’d been punched by Mike Tyson, luckily Kettle was again wise to the theatrics of Zola’s side.

But there is a good side to Watford’s game and it was demonstrated shortly afterwards as Pudil’s cross found Forestieri, but luckily the on loan striker was slightly off balance and fired over as a result.

Sustained Watford pressure soon told on the Addicks rearguard as the home side snatched the lead. This time Forestieri was the provider and after some hesitant defending from Charlton, Geijo crept in and slotted the ball past a helpless Hamer to ensure Watford led for the second time in the contest.

Charlton refused to lie down and stormed back again in outstanding fashion. A powerful and determined run by Ricardo Fuller ended with the striker’s cross being turned into the net from a scramble for the ball amongst a crowd of players. It turns out it was Chalobah who scored his side’s second own goal of the game as the Hornets were stung by another Addicks equalizer.

Buoyed by the travelling red army behind the goal they were attacking Charlton came from behind to lead for the second time as the game reached the final ten minutes. Dale Stephens’ corner from the right was powerfully headed into the top corner by Jackson as a he wheeled away in delight before knee sliding in front of the jubilant Addicks supporters.

The battling qualities that have been so apparent so far this season were demonstrated not only by the come back, but the fact that Wilson had to leave the field with a suspected broken nose shortly beforehand meaning the visitors were down to ten men. Jordan Cook was soon brought on by Powell in his place whilst the speedy Matej Vydra was Zola’s attempt to get his side back into the game.

Vydra had the ball in the net minutes after entering the fray, but it was the third time of the afternoon that the goal was disallowed as Charlton looked set to hold on. There was still time for a few more scares though. The familiar face of Forestieri saw his effort loop up off Evina and Hamer had to tip the ball over the bar and to safety, before foiling the same player again from the resulting corner.

The last chance of the game fell to the away side as Pritchard was found in all kinds of space in the Watford penalty area by Cook, but the energetic midfielder fired wide. It mattered not though as Charlton saw out a superb victory. The sheer determination and belief in the side is outstanding, and Powell clearly has all of the squad pulling in the right direction. There seems to be a sense of fearlessness and an overwhelming amount of character within the team and that can only bode well for the rest of the season.