Optimism is not a natural feeling around the Valley, even at the best of times. Charlton fans have been through their fair share of heartache, anxiety and disappointment to justify that.

But before Saturday’s 2-0 win over Queens Park Rangers, there was a genuine sense of confidence and belief that the Addicks have seldom experienced heading into the opening game of a new campaign. Charlton’s performance that subsequently followed did absolutely nothing to dent that – in fact, it did quite the opposite.

I could have so easily begun this article with the ‘proceed with caution – let’s not get carried away’ line, but this was a really terrific performance to be proud of so why shouldn’t we enjoy it? Perhaps taking a leaf out of the book of Katrien Meire – who popped open the bubbly after the game – would be advisable.

Don’t get me wrong, both my feet – other than when I’m re-enacting Tony Watt’s tunnel jump – are still firmly placed on the ground, but this was a statement of intent against a recently relegated Premier League side that deserves to be celebrated. 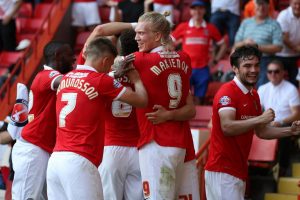 Cause for celebration: The Charlton players Fox’s goal

Broader issues, particularly the size of the squad, are still causes for concern. But more so than ever in the Duchatelet era is there now belief that the current group of players has the quality to compete in the top half of the Championship, not just for a game, week or month at a time, but over the course of a season.

This was proved prior to the game over pre-match pints, with the starting XI against QPR a hot topic of debate. I’d be impressed if anybody called Guy Luzon’s team selection, for Tony Watt seemed certain to start and though Karlan Ahearne-Grant impressed during pre-season, his inclusion was surprising nonetheless.

It would be bold to claim this is the best squad we’ve seen since our return to England’s second tier, as we still know little about many of the foreign imports, however the pedigree they arrive with coupled with the quality of the retained players is encouraging. Further, to say that anyone, debutants or not, had a poor game on Saturday would be harsh.

What’s amusing, however, is that had the game ended after half an hour, this article would have a hugely different undertone. New midfielder Ahmed Kashi went from an embodiment of the wholly pointless Christophe Lepoint to the club’s next saviour in a matter of minutes, while El-Hadji Ba grew as the game went on. Patrick Bauer, alongside arguably the most impressive in a red shirt, Alou Diarra, also increased in confidence as the minutes went by and Simon Makienok, in the friendliest way possible, was not totally useless.

He did, though, wander scarily close to my seat in the East Stand, explaining the reason for my nightmares in the early hours of Sunday morning.

Kashi’s exceptionally poor pass to Morgan Fox in the opening minutes, which forced the youngster to concede a cheap corner, had fans thinking ‘here we go again’ and when Charlie Austin – potentially playing his last game in a hooped shirt – was given the time and space to fire just wide with his left foot, the early sense of optimism almost came crashing down with an almighty thud.

QPR looked impressive, stroking the ball around with ease while Luzon’s men scurried after them, and with the corner tally rising every minute, you’d be forgiven for thinking that Rangers were to be certain league winners in waiting.

But suddenly, Charlton’s aimless clearances were swapped for exciting, attacking football and QPR’s fight was gone without any sign of a return. The Addicks’ first corner – a training ground routine that almost paid off – signalled that their season was finally underway, as corner-taker Kashi sprinted 80 yards to halt a QPR counter-attack and win a free-kick. No matter what kind of fan you are, I can guarantee you loved seeing that.

The Algerian was starting to show that no matter the question, he was the answer. Constantly receiving the ball from both full-backs and nine times out of 10 playing the simple pass first, he was an instant hit on Saturday and will be a firm fans’ favourite should he continue that kind of work rate until May. A Radostin Kishishev resemblance, noted on Twitter, is not far off the mark. Let’s hope his shooting is not quite of essence of the Bulgarian.

A goalless first half was all that the unfortunate Ahearne-Grant got, as he was swapped at half time for Watt, which proved to be the match-winning stroke of genius from Luzon. I say genius – even the person who thought a valiant and a robin would be a match made in heaven would have made the call to bring the Scotsman on.

It was quite the introduction from Watt, as after just seven minutes on the field, he grabbed the season’s opening goal for Charlton and with it a loud chorus of ‘Tony Watt Watt Watt, YOU WATT, YOU WATT’. 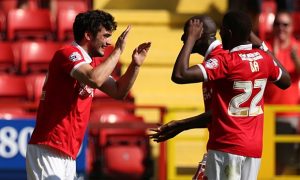 His direct style was just what the match, still lacking in clear chances, required. QPR were already, with over half an hour left, well beaten and never recovered. It doesn’t bode well for Chris Ramsey’s side, particularly if they lose Austin during this window.

Charlton were, by then, dominant and the likes of Ba and Makienok finally got involved, showing threats in different ways. The big Dane did, to his credit, cleverly let the ball run through his legs to Watt for the opener, following Ba’s pass, however he will have to both hold the ball better and win more in the air to be a real success in the Championship, given his size.

As ever, Johann Berg Gudmundsson was bright and lively – and living up to his David Beckham tag as he struck a late free-kick against the bar – and Jordan Cousins, however sick to death he is of being forced to play on the left, worked hard and gave Charlton balance. Never mind goal bonuses, if I was Cousins, the ‘don’t play me left midfield’ clause would have been the first term to negotiate on his newly-signed deal.

The feeling that Luzon is either waiting for an imminent arrival or for Cristian Ceballos to be match fit seems likely to explain why Cousins was pushed out there, though.

And then came Morgan Fox. The left-back, who is now the sole competitor for the position to new signing Zakary Bergdich following Rhoys Wiggins’ departure, will have been delighted to grab his first senior goal and secure Charlton’s victory, but the jury is still out. My mind has changed more times than Guy Luzon changed his touchline crouching position on whether Fox is up to the level of the Championship, but I’ll need a little more convincing yet.

His goal was exceptionally well taken, and I desperately want to put my confidence in another academy graduate, however his over-hit down-the-line passes and largely average crosses are less Chris Powell and more Gary Borrowdale – I can’t quite bring myself to accept him to be Wiggins’ successor. Not just yet, anyway. 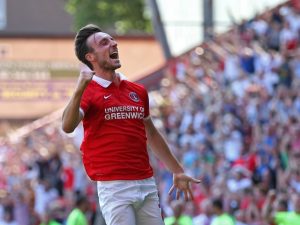 Tails Up: Fox wheels away in delight

Still, the confidence he and the rest of the squad will have gained from Saturday’s win will be vital, and might go a long way to giving Derby County a decent game next weekend. The league favourites’ 0-0 draw with Bolton was hardly an inspiring result.

The turnaround in fans’ opinions on Luzon – who, by no fault of his own, may still hear ‘you don’t know what you’re doing’ ringing in his ears at night (sweet dreams are made of this, Guy, who am I to disagree!) – is encouraging, and taking the players around the pitch on Saturday to clap each stand individually will do absolutely no harm to his reputation in these parts. His style of fast, sometimes direct, but normally exciting football is good to watch and, most importantly, seems to be working. 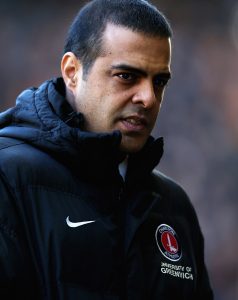 So, when you read the ‘keep your feet on the ground’ columns, sensibly think about our chances of a play-off push and listen to Channel 5’s ‘expert pundit’ (that’s firmly in inverted commas) Adam Virgo play down our chances on Football League Tonight – which was almost as cringey as a programme as the fans’ sofa is as an idea, by the way – think to yourself we’ve just beaten recently relegated QPR comfortably while putting on an entertaining and impressive show.

Can we enjoy it? Why the hell not.