New year, new start? Charlton fans will certainly be hoping so, with two wins in all competitions since September. Brighton & Hove Albion are the visitors to The Valley on Saturday – the Seagulls have enjoyed a recent upturn in fortunes since Sami Hyypia left his managerial post at The Amex Stadium. Chris Hughton is now the man in charge of the south coast club, and he and his side will be full of confidence as they head to SE7 this weekend.

An all too familiar inability to take chances in the opposition areas, coupled with a worrying tendency to commit individual errors at the back have meant that Bob Peeters’ men are looking to stop the rot this Saturday. The Addicks have managed just five goals in their last seven matches – and find themselves deep in mid-table.

Of course, many will point to the absence of key figures in the side over the last few weeks – and this week two fresh faces have been brought into the team in a bid to galvanise what is looking like a tired and weary squad.

Saturday’s opponents find themselves out of the drop zone on goal difference, but are unbeaten in their last four matches. Two draws – one away to Wolves and the other at home to Reading, were followed by back to back 2-0 victories.

The first came away at Fulham – an impressive victory overseen by former Charlton man Nathan Jones. The second was an equally impressive win at high-flying Brentford in the FA Cup last Saturday. It seems the Seagulls are beginning to spread their wings as Hughton undoubtedly targets a push up the table. 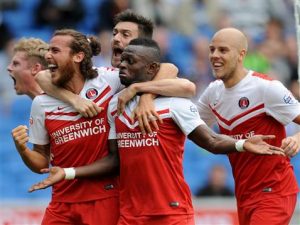 Sharp Shooter: Vetokele celebrates his second goal at The Amex in August

Charlton announced the signing of Scottish striker Tony Watt in the week, here’s some reaction from the world of Twitter, and his first video interview too:

Also just seen Tony Watt’s away to Charlton ? Step up for him then. Hope he does well!

You guys, remember Tony Watt scoring against Barcelona in the CL on 93 mins for Celtic in 2012?? He has signed for Charlton Athletic.

Request to the good folk of the Covered End, I would like something a bit more imaginative than “Tony Watt, Watt, Watt”, please. #CAFC

Opposition in focus: Seagulls Soaring Into A New Year… 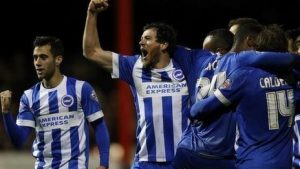 FT: Goals from Dunk and O’Grady give Albion passage into the fourth round. Resolute defensive performance, so fitting Dunk got crucial goal.
— BHAFC (@OfficialBHAFC) January 3, 2015

After the win over Brentford, Hughton stressed that although his side had found themselves under the cosh for large spells of the game, he still felt his side deserved the win, because they created better quality chances than their opponents.

“We had  a lot of defending to do, but we did that well, against a very good passing team.

“They might have had more in the box in terms of chances, and David Stockdale had to make a couple of good saves, but I thought we did our job defensively and deserved our win.”

Skipper Gordon Greer returned to the fold in the victory over Mark Warburton’s men, and the manager was keen to praise his central defender.

“He’s a big player both on and off the pitch. We all know what a captain who has been here a while can give to the team, and I thought he was excellent today.

Back in August, Charlton led twice at The Amex Stadium, only to be pegged back on both occasions with the match finishing 2-2. An impressive double from Igor Vetokele was cancelled out by a brace by Lewis Dunk for the home side – the second of which came deep into added time down in Sussex. 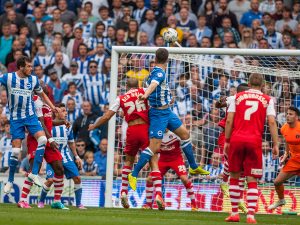 In Thursday’s press conference Bob Peeters revealed he’s hoping to be able welcome back some familiar faces into the fold for the game on Saturday. Therefore the line-up is somewhat guess work for the match….

As much as I’d like to avoid it, I’m anticipating Chris Solly being given another game in the centre of the midfield alongside the skipper. That should see Gomez slot in at right-back. On the other side of the back four, I’m hazarding a guess that Rhoys Wiggins could be available for selection.

Up front, I think we should go back to the strike partnership that started the season so strongly – Vetokele missed last weekend’s defeat to Blackburn and so should – and in recent weeks Tucudean continues to show glimpses of promise.

It’d be bold if he elected otherwise, but I’d imagine Peeters will hand new singing Tony Watt a role on the bench to begin with. I envisage the Scot being a replacement rather than a partner for Igor in the long term, given the striker’s recent barren run and struggles with fitness. Also, with this week’s speculation surrounding Simon Church, I doubt whether Peeters will include the Welshman.

A repeat of August’s encounter could well be on the cards. The visiting side have begun to pick up wins, and Charlton will be desperate to avert the continuing winless run. Peeters’ side draw matches like it’s going out of fashion, and Hughton will feel that a point at The Valley would represent a decent start to his time in charge.