Up until Boxing Day Charlton fans had enjoyed something of a bleak mid-winter. Bob Peeters’ side earned themselves a valiant draw with ten men against Cardiff City on Friday, and that should spark them back into life for the trip to Suffolk on Tuesday evening – where they’ll be looking to avenge the 1-0 defeat at the end of November.

One win in their last ten matches has seen Charlton slip into the realm of mid table as we approach 2015.  What started off as a blistering beginning to the campaign has quickly turned slightly sour, with the Addicks unable to replicate their strong early season form.

The transfer window in January presents an opportunity to resolve the lack of bodies in the squad, with the need for some older and experienced quality there for all to see.

For now though, Charlton must concentrate on their next league encounter at Portman Road against Mick McCarthy’s Ipswich Town. It took the dismissal of Callum Harriott on Friday for Peeters’ men to begin to show some thrust and fight – and it was a fantastic second half performance that arguably deserved all three points against a physical Cardiff side.

Tuesday’s opponents find themselves in second place in the division going into the game, and have lost just once in their last 18 SkyBet Championship matches, and so it looks to be a tall order to expect Charlton to get anything from the game. 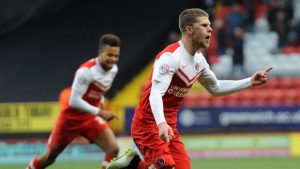 Stunner: Gudmundsson wheels away in delight after his equaliser on Friday

Following his side’s second half rally on Boxing Day at The Valley,  Charlton manager Bob Peeters was adamant that his men deserved all  three points against Cardiff City. Johann Gudmundsson’s stunner  secured a point, but the manager felt they could have won the contest.

“I think we should have won,” he said.

“We opted to put three at the back and put a striker on in the second half and battered them.

“If Igor had scored in the last second then the roof would have come off.  But this the best I’ve seen us play in the second half, especially with ten men.”

As well as praising his players, Peeters was also keen to highlight the positive effect that the backing of the home crowd had on the performance in the second half.

“Hopefully the fans see that when they back us, this is a very difficult place to come.

“In the second half Cardiff were all over the shop because the fans were pushing us towards their goal, if we can do that for every minute of every game then a lot of teams will come here and lose points.”

I’ll forgive anything if I see my team fight. Second half I did. Cannot ask for more. #CAFC
— Hungry Ted (@HungryTed) December 26, 2014 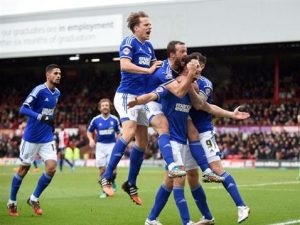 Bees Get Stung: Ipswich players celebrate one of their four goals in the win over Brentford

I spoke to Ipswich Town Fans (@town_fans) and some of their followers to get their thoughts on the successful season so far, and how they saw Tuesday’s game going….

“We have a new found belief in the side. Last season we were so close to making the top six – and now we’ve come back even stronger this year.

“This has been reflected in our home form which has been fantastic, the support has been amazing, and that in turn has contributed to the performance of the team.”

“Our front two of Murphy and McGoldrick love playing together, and the crowds are returning at Portman Road as well, which is acting as an added boost at the moment.”

“Having seen Charlton draw a lot of games, it seems that they need something extra to push them on. You seem a solid side, and I’d say we’ll be pushing hard for another win on Tuesday so a draw for your side would be a great result.”

“My experience of Ipswich with Charlton goes back to the original playoffs. I remember as a young lad heading to a the 2nd leg at Selhurst Park – we lost that one, I was gutted!”
I think many Ipswich fans have a connection with Charlton especially back to those Curbs and Burley days. We played some good football and the there was Matty Holland who helped too. But that maybe sours things a little off the pitch for some!” 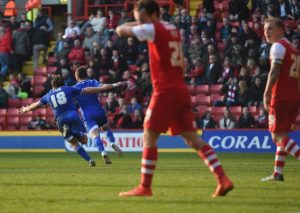 Sucker Punch: Hunt and Tabb wheel away in delight after the former’s late winner in November

A late Noel Hunt strike at The Valley at the end of November saw Ipswich Town grab all three points in a 1-0 win, on a day where Charlton did everything but score.

The televised contest saw the home side create a whole host of opportunities, but they were made to pay for their lack of a finishing touch in front of goal by the well-travelled front man.

Callum Harriott’s dismissal against Cardiff rules him out of the trip to Suffolk on Tuesday, and it will be interesting to see how Peeters shuffles the pack. Being away from home against such tough opponents, it’s likely we’ll opt for the 4-4-1-1 formation rather than replace Harriott with Vetokele in a 4-4-2.

If we can take a point from the game that should be seen as a fantastic result – that’s reflected in my choice of line-up.

Etheridge did well on his debut on Friday (below), and the centre-back trio also impressed during the second half display. Either side of them, the full backs may be young, but with the experienced heads in between them I’d support the idea that they’ll be marshalled in defence.

NE: I’d like to sign a long-term contract here. The Cardiff game put the ball rolling and I want to cement a first-team position. #cafc

Ahead of them, you know you’ll get work-rate aplenty with Wilson and Gudmundsson. The skipper’s central midfield partner should be Jordan Cousins – he isn’t a winger, in the centre is his natural position. The omission of Buyens is something I think should also happen, having started the campaign well he seems to have gone off the boil recently, and a spell out of the side may do him good.

Up front, George Tucudean produced his best performance in a Charlton shirt on Boxing Day, and he deserves another start at Ipswich. The Romanian produced moments of individual brilliance and coupled that with some excellent hassling and harrying of the opposition:

Today also felt like a bit of a potential turning point in @tucudeangeorge‘s Charlton career. Fans really got behind him second half. #cafc
— Iain Liddle (@IainLiddle) December 26, 2014

The character shown in the second half of the game against Cardiff gives me the belief that we won’t go down without a fight on Tuesday evening, but I just feel that the quality of the opposition – with the likes of Daryl Murphy in attack, will see us lose out over the ninety minutes.

Wow. That’s proved me and a lot of people wrong. Great second half! #cafc