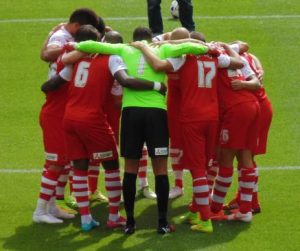 Tonight’s game against Derby County gives Bob Peeters’ side a quick-fire opportunity to follow up Saturday’s good result – the 2-1 win at home to Wigan Athletic maintained the manager’s unbeaten record in competitive fixtures.

A hard fought 1-1 draw away to Brentford on the opening day was followed by a 4-0 home romp over Colchester seven days ago, and Saturday’s result capped a near perfect first week for all those in SE7. 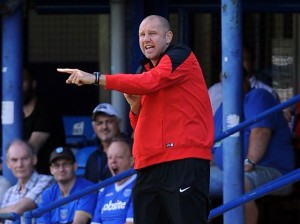 The last gasp win on Saturday sent The Valley into delirium, with manager Bob Peeters seemingly ‘over-celebrating’ by running to his right and towards the away dugout to celebrate Franck Moussa’s late winner.

Wigan manager Uwe Rosler took exception to this at the final whistle, with the two coming to blows in front of the West Stand.

After the game, Peeters said: “I started running and celebrating. I didn’t know where to go. Uwe said, ‘Don’t come and celebrate in my corner’, but I’m not going to mention the other words he said to me.”

“I need to keep my composure and go away because I know it is emotional in a game where you score in the 94th minute with a deflected shot.”

Fighting talk from our manager, and if Charlton can reproduce Saturday’s performance and Peeters can keep a lid on his already admirable enthusiasm, another win is perfectly possible.

Tonight’s opponents also come into the match unbeaten in their three competitive matches so far.

Steve McClaren’s side enjoyed a 1-0 home victory over Rotherham in their first match, before they advanced through to the next round of the Capital One Cup following a 2-0 success at Carlisle.

Saturday’s 0-0 draw away at Sheffield Wednesday meant it was three clean sheets out of three for The Rams, but having been the highest scorers in the division last campaign, the lack of goals could be a worry for fans of the Midlands club, even at this early stage of the season.

The tight match was reflected in the manager’s comments after the game: “We were on the back foot, we stopped playing football and credit to Sheffield Wednesday, their game plan was good and they put us under pressure and they probably felt at half-time they should have gone at least one goal up.”

McClaren’s comments indicate that if Charlton can close down tonight’s visitors when they’re in possession and harry their opponents then they could have some joy.

Indeed, with players like Will Hughes, Jeff Hendrick and Jamie Ward pulling the strings in behind frontman Chris Martin, the key to victory tonight could lie with Yoni Buyens and his ability to dispossess the Rams in the middle of the pitch.

Here’s what the fans are saying ahead of tonight’s match:

Big game at The Valley tonight involving one of the promotion favourites, oh and errrm, Derby are playing as well… #cafc

Looking forward to my first trip of the season to the Valley tonight. Coyr #cafc

Nice day off yesterday. Now back to work and off to The Valley tonight. I’d settle for an exciting 2-2 draw and another point #cafc

Last year’s contests between Charlton and Derby saw the Rams come out on top on both occasions.

The meeting of the two at The Valley in December finished 2-0 to Steve McClaren’s men. The win meant it was six successive victories for the impressive visitors – goals from Jamie Ward and Craig Bryson were enough to see off a spirited Charlton side.

The reverse fixture in March saw Derby continue their march towards the play-offs, and goals from Jonny Russell, Chris Martin and Patrick Bamford saw the hosts run out convincing winners at the iPro Stadium.

There are few selection flashpoints that have arisen after Saturday’s game.

Stephen Henderson’s injury he picked up during the match suggests he won’t play a part this evening, leaving Nick Pope to fill the void left by the summer arrival.

Another area for discussion has been the centre of the midfield, and whether Johnnie Jackson should retain his place alongside Yoni Buyens.

The argument is that Jordan Cousins would be better suited to the role, allowing Callum Harriott a start on the left hand side, with Gudmundsson on the right.

But in all honesty I can’t envisage the manager dropping the captain, not least because Jackson was withdrawn with fifteen minutes to go at the weekend.

Elsewhere, Rhoys Wiggins was at fault for the goal on Saturday, and at times seemed unconvincing with some wayward crosses and questionable defensive positioning – should Morgan Fox step in?

That’s up to Bob Peeters, but with such well travelled and experienced opponents this evening, you’d think Rhoys would retain his place in the starting eleven for now.

I’ll have a sensible guess that this is how we’ll line-up this evening:

It remains to be seen whether Lawrie Wilson should start ahead of Solly – time will tell just how much of an effect his injury will have on his playing time during the coming campaign.

Now for my match prediction…

A point against promotion favourites this evening would be another admirable result for this new side, but you just get the feeling that we’re capable of more. Some of our football on Saturday was the most fluid I can remember seeing for quite some time, and I think we can cause Derby problems if we play like that for longer spells tonight.

Day off work and back to The Valley tonight. Said I’d take a point on Saturday and that turned out well, same again! Youuu reds!