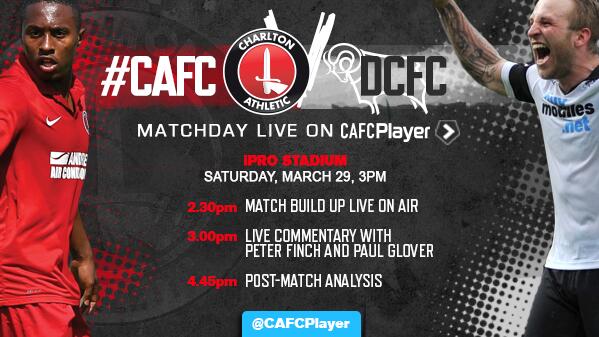 It has been another turbulent week for The Addicks and this Saturday is another crucial game to ensure that our club is clear of relegation this season. The midweek 0-1 victory over Nottingham Forest made up for a disappointing 0-3 defeat against Burnley at The Valley last Saturday. Riga and the team will be looking for another performance similar to Tuesday night to get another crucial three points to close up the gap on Doncaster who are currently five points away in 20th position.

Riga has said that he will be rotating the team to assist with the hectic fixture schedule and he has this week brought in Manchester United’s Under 21’s captain to add to the squad, Davide Petrucci.

Last Saturday’s 0-3 defeat to Burnley at The Valley brought another blow to our relegation fight, but Tuesday night saw a completely different display from Riga’s reds and the team managed to seal a 0-1 victory at Nottingham Forest to create a three point gap between us and the bottom three and it was Jordan Cousins that grabbed the winner with just ten minutes to go.

There was a positive reaction from Riga, the players and the fans on social media after the huge win against Forest.

Jose Riga spoke after the game on Tuesday night, he said: “In the end I think that we deserved it, based on a good organisation. We did well in terms of quality, too, and created chances. We are back to feeling good ahead of two games away so it was very important.”

Valley talk shared their appreciation for Cousin’s goal on twitter: “Chuffed for Jordan Cousins too. He’s been consistently excellent this season but hasn’t quite had that moment in the spotlight. Deserved.”

Morgan Fox made an appearance for The Red’s and seemed ecstatic to have been involved, he tweeted after the game; “Boys deserved that win! Buzzing to be part of it at the end as well.”

The Rams put on a fine display at home to Nottingham Forest last Saturday with a 5-0 victory, which saw a hat-trick from Craig Bryson in front of a 33,000 attendance. But County then travelled to Ipswich on Tuesday night and Mick McCarthy’s men got the better of them as they suffered a 2-1 defeat.

Derby are sitting in fourth place on 66 points and are aiming to be a Premier League team next season, their hopes of automatic promotion have dwindled as 2nd place Burnley are now 13 points ahead, but Steve McClaren is confident that their place in the play offs is safe.

Charlton have had a busy Thursday with the loan market, The Reds said goodbye to Marcus Tudgay after he was recalled by Nottingham Forest.

In the same hour, Charlton announced that they have signed Manchester United midfielder Davide Petrucci on loan until the end of the season.

The CAFC website reported, “The Italian will train with his teammates for the first time at Sparrows Lane on Thursday morning and is eligible for selection at Derby County on Saturday.”

“Petrucci is known as a creative player with an eye for goal who can play in a central attacking midfield position or in wide areas.”

This week, Riga said; “I also knew that we don’t have a player who is able to score on his own. We have to do it as a team and I very proud of what they have done” Which may be why he feels that Petrucci is the man to help us.

The Rams have stated that Simon Dawkins will be out for two weeks with a groin injury, so he will not feature against us on Saturday.

Jamie Ward is also a doubt after coming off just before half time last Saturday with a hamstring problem.

My ‘one to watch’ this week is Craig Bryson, he has score 15 goals for Derby so far this season and is a midfielder that can never be left with some space, their midfield is very strong and I think that it will make a tough game for The Addicks, County’s Will Hughes has been named in the Football League’s ‘Top 10’ players list for the 2013/14 Sky Bet Championship.

Riga is looking to keep The Addicks safe this season, I think that his organization of coaching is working well and if we manage to get the three points at Derby he will be certain that we can continue to be a Championship side.