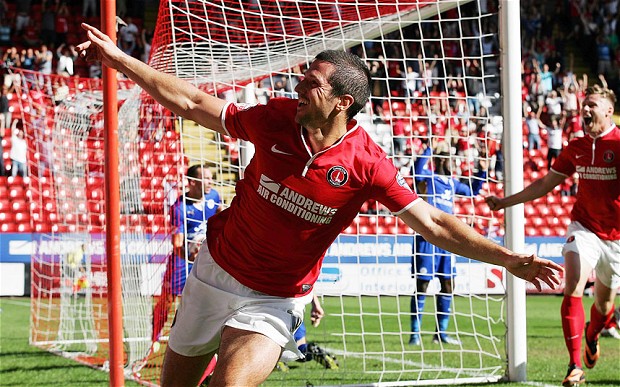 With the Doncaster defeat a distant memory (despite being less than 24 hours old), Wednesday evening saw Yann Kermorgant and his agent board a train down to Bournemouth to discuss personal terms with the south-coast club.

Out of contract in the summer, Charlton indicated that Kermorgant, described by some as distraught at the situation, had rejected their offer of a new contract. Bournemouth had already made their offer to the Addicks, meaning that all that was left was for the talismanic striker to agree to the deal.

For 48 hours, Addicks fans hoped and prayed for a favourable outcome, and would have been relieved to see Kermorgant arrive at Sparrows Lane training ground on Thursday morning. This proved to be a false dawn however, and after what felt like a lifetime, Kermorgant was announced as a Bournemouth player by Friday lunchtime.

In just over two years at the club, Kermorgant built one of the most unique fan/player relationships ever seen in SE7. His history, his desire, and his overwhelming love for Chris Powell made him an instant favourite amongst fans, and as his Charlton career blossomed, so did his cult hero status.

Just a year before signing for the Addicks, Kermorgant ended a largely unhappy spell at Leicester by missing a penalty to knock the Foxes out of the Championship play-offs. Banished to train with the youth set-up, it seemed like his career was slipping away, but his work ethic and talent had drawn the attention of one Chris Powell.

As the new Charlton manager, Powell brought him to The Valley in September 2011, and Kermorgant made an instant impact with a goal on his debut for the club. He went on to score another 31 goals in 95 appearances, carrying the team into the Championship, and securing a place in Charlton fans’ heart’s. He was loved, not like a player, but like a friend or family member. He truly cared about the club and the fans reciprocated this care. His transfer to Bournemouth brought out a campaign to prevent the transfer, but Duchâtelet’s mind was made up, leaving fans feeling hollow and empty.

The most upsetting aspect seems to be the reluctance of the move on all fronts. Powell most certainly wouldn’t have wanted his Yann to go. The fans have been distraught ever since the rumours surfaced. Even Yann himself appeared in his first interview for Bournemouth, announcing ‘I’m a Charlton fan as well. I had a very, very good relationship with the fans and I love them. I will always be grateful for what they have done for me’. It just seemed that at 32, his time was up. Duchâtelet had already spoken about investing in youth, and so it proved.

Kermorgant’s time at Charlton has cemented his place as one of the most loved players of modern times. 32 goals in 96 appearances, which included scoring in every match against his former club Leicester, also included some of the finest strikes of the ball seen in SE7.

The last few days of the transfer window are traditionally quiet for Charlton, but it wasn’t just Kermorgant that made his way through The Valley’s revolving doors. Creative midfielder Dale Stephens also left for Brighton, Alnwick moved to Leyton Orient and Smith was sold to Swindon. In addition, young ‘keeper Pope, striker Pigott and youth-teamer Sho-Silva all left on loan.

It wasn’t just outgoings however, and new owner Roland Duchâtelet began to justify Kermorgant’s departure with some interesting signings. Thuram-Ulien (goalkeeper), Ajdarević (midfielder) and Anil Koç (winger) had all already signed on loan, and were joined on deadline day by Loïc Négo (right-back) and the two young and highly rated strikers Reza Ghoochannejhad and Piotr Parzyszek. In addition, left-back Rhoys Wiggins signed a new 4 and a half year contract.

The signings represent the potential future for Charlton, and it’s important to put the Kermorgant years behind us. His part in the side cannot be understated, but the fans job is to get behind the new boys. With more player contracts (not to mention Powell’s) to sort out, and the team in the relegation zone, fans must get behind their club and help the club out of trouble. Yann, you’ll never be forgotten. Thanks for everything. Au Revoir!

In Powell We Trust!