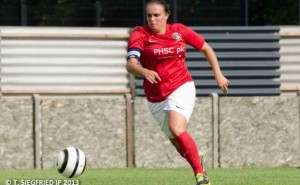 Last Sunday myself, Dan Finch, Natalie Rowland and Louis Mendez headed down to Thamesmead to watch the CAFC Women’s team in league action vs Chesham United, the girls won 3-2 despite being down to 10 players later in the game due to injuries.

I could do a match report, but I leave that to those that can, instead I want to see if I can get as many of you down to their next home game as possible. Charlton Live has been covering the team for over a year now, with regular live interviews with players and staff on our Sunday show, we are also producing a regular show on Meridian Radio dedicated to the team, at Charlton Live we believe the women’s team are an important part of the Charlton family and fully deserve the coverage they get from us.

The one thing we really want to see is more of the regular Charlton Fans heading down to watch them, and with an international break upon us this is the perfect opportunity to go and get behind the girls, they play their home games at Sporting Club Thamesmead, Bayliss Avenue, this season, a new stand has been opened, offering comfortable seating, a bar and very good food (I recommend the chicken and bacon club sandwich), you can of course stand if you want, my knees are knackered so the offer of a seat is more than welcome.

The Charlton women’s team are proud to be supporting Breast Cancer Awareness Month, alongside Portsmouth Ladies when the two sides meet on Sunday.
With no men’s team game due to the international break, Addicks fans can satisfy their weekly Charlton fix by supporting the women, with tickets priced at just £3 for adults and £1 for concessions.
Both sides, as well as the officials and groundstaff, will be wearing pink bibs with the logo of local cancer charity The Pink Ribbon Foundation on them. There will also be a bucket collection at the ground in aid of the charity.