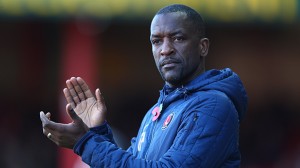 Charlton manager Chris Powell was delighted with the character his young players showed at Dagenham on Tuesday evening.

The Addicks boss singled out Callum Harriott and Jordan Cousins for praise in particular.

Speaking about Harriott, the manager was full of admiration for the winger. “He’s an exciting player; he’ll get people out of their seats because he’s a real talent.”

Powell went on to say: “I’m pleased with what he’s been doing in preseason, he will make things happen, and he will only get better with our group of players.”

He was also excited about what the new season had in store for Harriott, saying: “I’m looking for him to continue into the season in this vein.”

Fellow youngster Jordan Cousins also caught the eye for the visitors. The versatile midfielder and defender went on the tour to Spain with the first team squad a few weeks ago, and Powell paid tribute to his performance.

“He’s a player with experience in a variety of positions. He’s a young player who we hope will develop.”

Powell stressed that Cousins was very much in his plans for the coming season: “The more he feels comfortable in training with us and playing in games, the more it will benefit him long term.”

Elsewhere, Powell also gave Joe Pigott and Morgan Fox some game time in the second half, and was pleased with how they acquitted themselves.

“I’m not afraid of putting the boys in, and hopefully they’ll become a mainstay of my first team squad”.

With a lack of summer transfer activity so far, Charlton fans could find themselves becoming a little more familiar with these young individuals if Powell’s comment are anything to go by.