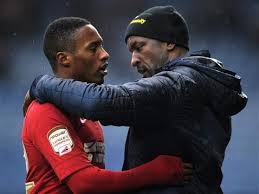 Harriott has impressed during preseason

The first corner of the game went to the visitors and it produced the first goal.

Danny Green swung the ball in from the left, the ball bounced around in the box, and Danny Hollands swivelled before rolling the ball into the net.

Danny Green drove forward again as the clock reached ten minutes. The ball came across from the right and it was Hollands who nearly had a second, the midfielder’s effort was well blocked by keeper Chris Lewington.

Jordan Cousins was given a start in the centre of midfield, and the youngster was impressive in the opening period. His strong run forward was well dealt with by the home defence as the visitors continued to threaten.

Evina and Harriott were a constant threat throughout the half for Charlton, and it was the latter that soon doubled their lead.

Chris Solly’s marauding run forward and left foot cross was collected by Harriott. The winger stepped over the ball twice before firing low and past Lewington for 2-0.

Hollands was finding himself with acres of space in advanced positions, and he could have had another soon after.

Cousins eye catching run forward produced a neat cut back that was met by the onrushing midfielder, but his shot was blocked again by Lewington.

Harriott was also presented a chance to add to his tally; unfortunately the winger could only curl the ball wide as the half came to a close.

The only change made at half time for Charlton was David Button who replaced Ben Hamer.

A fantastic ball from Cousins found Kermorgant soon after the restart but the striker chipped wide from a tight angle.

In a quieter half, Zavon Hines was a constant thorn in Charlton’s side. The winger’s pace and trickery had to be marshalled by a combination of Evina and Cousins as Charlton looked to hold their lead.

Dagenham grew into the game and Josh Scott capitalized on a Dorian Dervite error, and Button had to be alert to deny the striker.

Hines’s free kick was well met by centre back Brian Saah and Button did well to throw himself across goal to tip it wide, but the linesman had his flag up to halt the attack afterwards.

Fox delivered a dangerous ball from the left as the game moved into the final five minutes. The cross reached Bradley Pritchard at the far post but the substitute headed over.

Referee Andy D’Urso brought the game to a close as Charlton notched up another convincing win.