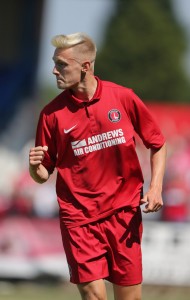 Charlton ran out convincing 5-0 winners at Park View Road on Saturday afternoon. An impressive first half hat-trick from young Joe Pigott, a neat finish from Kermogant, and a well taken penalty by Danny Green helped the Championship side kick off their campaign in style.

Pope: didn’t have an awful lot to do, but commanded his area well and never looked like conceding in a dominant first half display.

Solly: reliable as ever, linked up well with Pritchard down the right. Good cross field distribution to find Harriott on a number of occasions.

Fox: an impressive first team debut, looked comfortable and assured on the ball. Likely to provide good competition to Wiggins next season.

Wood: a steady debut, good with the ball at his feet and won his aerial battles well. Will be interesting to see how he develops as we give the defender some more game time.

Morrison: had a solid half, worked well with Wood to keep a clean sheet.

Pritchard: tireless running as ever, always looking to get involved going forward.

Harriott: didn’t stand out as much as fellow youngsters Pigott and Fox, but made some dangerous runs forward and set up Kermorgant nicely. Could have done better with the two chances that fell his way.

Jackson: led by example in the centre of the field, eager to get on the ball and start the attacks.

Hughes: a performance that Charlton fans have now come to expect, dependable and effective performance alongside the skipper.

Kermorgant: showed some fantastic touches and link up play with Pigott. Set up all three of his strike partner’s goals, and even grabbed one for himself.

Pigott: the stand out performer. Three well taken goals, all showing composure and instinct in front of goal. Impressive debut, and has really put himself in the frame for next season.

Button: had more to do than Pope in the first half. Some good shot stopping saves as he got down well for a couple of dangerous Welling efforts. Looks as if he’ll provide solid back up to Hamer again this year.

Wilson: took the armband for the second half. Did well to keep tabs on Hughes-Mason on his side of the field, solid defensive performance.  May have felt he could have been involved slightly more going forward.

Evina: looked sharp going forward and did well defensively. Some good runs down the left that were well found by the midfielders on several occasions.

Dervite: comfortable both in the air and with the ball at his feet. A couple of ventures forward were well timed and calculated, and got himself involved in the game well.

Cort: impressive in the air as ever, gave stability at the heart of the back four.

Green: impressive performance, good delivery from set pieces and some good crosses as well that set up Smith in the centre. Well taken penalty to cap a good performance.

Gower: effective with the ball at his feet, settled into the game well.

Stephens: at the heart of the play in the second half. Always looking to get involved with attacks and produced some nice passes out wide to both full backs.

Hollands: linked well with both Stephens and Gower, resourceful in possession and hard working without in difficult conditions.

Cook: always looked to provide an outlet down the left. His pace was his biggest asset, and he used it well along with Evina. However was wasteful in possession on a couple of occasions.

Smith: given the lone striker role and carried it out well. Was a presence in the area and often dropped deep to collect the ball to start attacks.