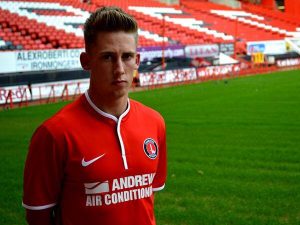 This seasons kits has been unveiled at last, last season the kit was launched by a parachute display team landing on the Valley before the last game of the season against Hartlepool, this seasons launch was a little less public, fans had been eager to see the new kit since the end of the season past, it seems the delay is down to arrangements for the shirt sponsorship, once that was resolved the kit could be launched.
But now it’s here and I like it, the shade of red used last season was too dark for my liking, so a return to a more vivid red is pleasing. The general reaction on Twitter is the usual mix, although I think the majority of fans are happy with the shirt.
During this season we conducted a less than scientific survey of listeners via, email and twitter to find our least favourite kit of all time, the Centenary kit came out top of that list, something I fully agreed with, but regardless of the shade of red, the design what really matters is the badge and the players that wear it at the end of the day.