After reading my Father’s opinions on the England squad I decided to do some research of my own and worked out the average age of the Spanish,Germans,Brazilians and the Dutch at World Cup 2010.

England’s Average age at the tournament was 28.4 with the oldest member being David James at 39 and youngest being Joe Hart.

Spain’s World cup winning side average age has been decreasing over the previous 12 years and came out at 25.9 With the oldest member of the squad being Joan Capedivila and youngest being 21 year old Javi Martinez .

Germany came to defeat by the Spanish but with a squad that had 5 members of the u21 squad the year before averaging an age of 23.8 with the Oldest being Hans Jorg Butt and youngest being 20 year old Toni Kroos.

Holland managed the world cup final with their squad which had an average age of 27.6 with the oldest being 39 year old Sander Boshkar. and Youngest being 22 year old Gregory Van Der Wiel.

Brazil who were kicked out by earlier than would of liked left some key characters are home and had a average age of 29.8. Oldest being Gilberto at 34 and Youngest Ramirez at 22.

So what has been Englands problem? is it age well when we met Germany in the World Cup our average age in the squad was 3.5 years older than the Germans and now in the last game in Montenegro our average age fell to just 25.5 with our oldest player being Frank Lampard. with Germany’s oldest in their game against Ecuador was Podolski who is only 29 years old.

Is England’s squad to old? I say no. I believe that the squad that we have hasnt got the skill and ability that the Germans and Spanish have. Our current midfield of Alex-Chamberlain-Gerrard-Lampard- Walcott play for some the top teams in the English League But the English midfield hardly touches the Spanish midfield of Xavi-Iniesta-Fabragas with Mata and Pedro on the wing. England suffer from this problem everywhere on the pitch Without Rooney up top England don’t really have another striker who has the reputation and the history of A large goal tally. Rooney is a always when it comes to the squads a long with Welbeck and Sturridge who both have only averaged 8 goals a season compared to Rooney’s 17 goal a season. This compared to the German most used strikers Gomez,Podolski and Muller who average 16,14,12 respectively.

Does the big problem lie in the league system? Many managers and journalists have blamed FA ruling for this situation. Many countries have certain rules about home grown players for example in Scotland you need 4 players under the age of u21 in your Match Day Squad and in Spain you need 5 in your starting 11 with 2 from your youth academy this hardly happens in English football. In fact the only rule the FA have set is there must be 8 players of the 26 players in the squad from the UK that means they are accepting that the other 18 players shall be from abroad. This means that the youth of the nation has struggled to brake through. Since the u21 tournament in 2011 only 8 of the 23 going on to play for the England first team whilst the Spanish have had 13 of that squad brake through. The England team only have 8 players that made more than 15 games in the league that season. whilst the Spanish had 20 players playing 15 or more games.

Going back to the original thought of how England team is ageing and if the squad is holding us back. Ive made two sides one over the age of the 25 and on younger and here they are.
Hart,Cole,Terry,Jagielka, Johnson,Milner,Gerrard,Lampard,Downing,Rooney,Defoe.
Butland, Gibbs,Jones,Smalling,Walker,Walcott,Cleverley,Wilshere,Chamberlain,Sturridge,Welbeck.

When you look at both squads on paper In My opinion The older generation of the team looks better than the younger version of the Three Lions team. But in my opinion the best team would be a mixturewhich would look like this:

Luckily for England despite the hatrid and look down on Roy Hodgson his squads have looked towards the future than picking teams full of the older people who have failed us. The point is even when looking at the younger generations of the England system we still lack the opportunity and skill to take our team forward. the quarter finals seems to be where we will be for many years to come. Until we can sort out our youngsters at League level there is no way that England can do well on the international stage. 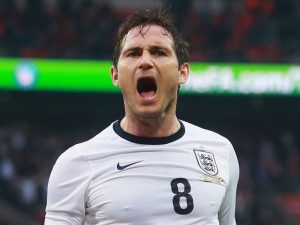