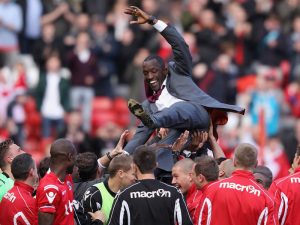 Powell has brought the good times back to The Valley

Rewind to January 2011 and Charlton were still at the bottom of the slope they had slid down over the past 4 years. The club had dropped out of the Premier League in 2007 and this was followed by further relegation from the second tier in 2009. Phil Parkinson led the side to the play offs at the first time of asking in League One, but the Addicks fell short and lost on penalties to Swindon Town.

A year later, Parkinson was relieved of his duties and in stepped a legend – Chris Powell. The appointment raised a few eyebrows but Powell won his first four games in charge. However, an awful run towards the end of the season saw the South Londoners slip to a disappointing mid table finish.

Something had to change, Powell said himself that it “Wasn’t the Charlton he knew and loved”. Would a man with so little managerial experience be able to save his beloved club? A clear out followed, and Powell brought in 19 new players in an attempt to bring new life into the side and return them to their former glory. He did just that, and in April 2012 Charlton won promotion back to The Championship as League One champions.

This season has been equally impressive; a 9th place finish in their first year back in the second tier is a sterling effort, made even more eye catching by the fact that Powell paid transfer fees for only David Button and Lawrie Wilson. Ricardo Fuller was brought in on a free, and the side was otherwise the same as the title winning campaign the year before.  With Powell at the helm it seems the only way is up, and if you dig a little deeper into the younger sides and you’ll see the future is definitely bright for Charlton Athletic.

The Charlton academy was formed in 1998, and since its beginning 22 players have made the journey to the first team squad. Amongst them, Jonjo Shelvey, Rob Elliott and Carl Jenkinson have gone on to become regulars for Liverpool, Newcastle and Arsenal respectively. More recently, Chris Solly and Callum Harriott have broken into Chris Powell’s first team.

The strength of the academy and the talent it possesses has been demonstrated this year. A stunning season for the Development side has left them on the brink of treble glory. Having already secured the Development League 2 South Title and the Kent Senior Cup, they now find themselves in the final of the National Cup away to Cardiff City on Saturday. Doubles over Swansea City and Millwall, as well as wins against Cardiff City and an impressive draw against Premier League QPR have sealed Nathan Jones’ side the title, and a convincing 7-1 rout of Tonbridge Angels last week completed the double with the Addicks able to add the Kent Senior Cup to the trophy cabinet.

So what’s the key to success? The towering presence of Michael Smith and Joe Piggott up front has certainly played a part. The duo have both had brilliant seasons, and have formed a formidable partnership for their side. Nick Pope has had an equally impressive season between the sticks, and was rewarded with a substitute appearance against Bristol City last Saturday. At the back, the ever present full backs Morgan Fox and Harry Lennon have both had solid seasons, and the team were able to rely on the rock solid partnership of Kevin Feely and Jordan Cousins at the heart of the defence. Diego Poyet and Captain Bradley Jordan have also caught the eye, and the hope now is that a number of them can make a push for the first team in the near future.

The same success has been mirrored in the U18 side, as they won their Development League. Although the side were knocked out on penalties at the semi-final stage of their national competition, it has still been a brilliant year for the youngsters.  The league campaign was where the side excelled, losing only three games all season. The FA Youth Cup saw the young Addicks suffering extra time heartache at the hands of Chelsea under The Valley floodlights in mid-January.

Paul Hart and Steve Avory oversaw the running of the U18s, and a number of players came into their own this season – none more so than Oliver Muldoon and Tom Derry in the centre of midfield.  Both players have an all action and energetic approach to the game, and these traits seem to have rubbed off on their team mates. Dillon Phillips has been a regular figure in goal this year, and has risen to prominence at international level as well.

Harry Gerrard, Tareiq Holmes-Dennis and England international Joe Gomez have all made steady progress, whilst up front, Tobi-Sho Silva continues to lead the line for the side. The striker has represented the club at U18 level since the age of 14.

With such an abundance of talent in both age groups it is fair to say that the future looks rosy for Charlton. The revised development squad structure with Nathan Jones in charge looks to have established a promising group of youngsters brimming with talent, whilst the academy is churning out more outstanding prospects that look to make the step up to the U18 side and beyond.

There is no doubt that there is a feel good factor around the club from the top down. Powell, Jones and Hart are all overseeing some of the club’s brightest talents in a long time and if the progress of the younger players can continue under their coaches, Powell is most definitely the man to give them their chance in the first team.

As Charlton fans we are incredibly lucky to have Chris Powell in charge at our club. The manager has instilled new found belief and an incredible desire to win and succeed together as a team. Speaking at the Player of the Year dinner last weekend Powell emotionally claimed “We’re getting there together; we’re getting back to where this clubs belongs. You as fans have had it hard in recent times, so enjoy it.”