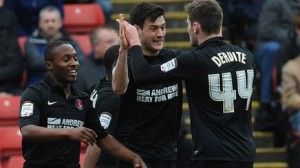 Charlton stretched their unbeaten run to four matches on Saturday afternoon with a superb 6-0 thrashing of Barnsley at Oakwell, and in doing so set a new club record away from home. With six different names getting themselves on the score sheet it really was the complete team performance. For their opponents, it was an afternoon to forget, after the home side had both Stephen Dawson and Tom Kennedy dismissed in the second period to leave them looking nervously over their shoulders at the relegation places. There can be no such worries for Charlton now, as this win looks to have sealed Championship survival.

It was a case of as you were in terms of team news for the Londoners as Chris Powell named the same side that had grabbed a late victory over Leeds United last Saturday at the Valley. The visitors were seeking to continue their fine recent run of form and Ben Hamer kept his place in goal, with Solly, Morrison, Dervite and Wiggins tasked with keeping the inform Tykes at bay. In midfield, Callum Harriott was named on the left hand side for another game running – the youngster is going from strength to strength and looks a real prospect. Recently installed Andy Hughes partnered skipper Jackson in the middle, with Bradley Pritchard given a place on the right hand side. Up top, it was left to Yann Kermogant and Ricardo Fuller to lead the line in what looked an attacking formation.

It didn’t take long for Charlton to get themselves ahead in the contest, as the visitors burst out the traps and grabbed an early goal inside four minutes. Ricardo Fuller powerfully drove down the right hand side in familiar fashion, before laying the ball back to the supporting Chris Solly. The full back found Kermogant in the middle, and when the striker’s shot was spilled by keeper Jason Steele, Bradley Pritchard was on hand to prod home the rebound and put the Addicks ahead.

The Tykes had started the game sluggishly and their first chance came when Chris O’Grady tried his luck from the edge of the area, but Hamer gathered his shot without any problems as Charlton kept their opponents at bay in the opening stages.

The away side looked full of confidence, energy and desire, and as Pritchard was left unchallenged to creep his way into the area, the midfielder added an assist to his name as he coolly slipped the ball to Jackson who shimmied and weaved his way past the Barnsley defence delightfully to leave two on the floor before firing under Steele for 2-0.

There was no doubt that they’d deserved their lead, and Charlton really were in the ascendancy as the half went on. Former Chelsea man Jacob Mellis wasted a free kick in promising territory for Barnsley, and then Chris Dagnall also saw his effort stopped by Hamer as the Addicks looked comfortable.

In the home dugout, manager David Flitcroft sensed that changes had to be made to his side if they were to get themselves back into the game. He brought on Jason Scotland in place of Tomas Cywka in an attempt to galvanise the hosts attacking threat, and Barnsley suddenly looked like they could pose Charlton problems.

Scotland’s first contribution was to tee up Mellis who saw his goal bound effort cleared off the line by Wiggins, before full back Bobby Hassell headed wide from a corner after some pressure from the home side. But Hamer and his defence kept them out, and the impressive visitors went in two goals to the good at the break.

The consensus in the away end was that the best game plan for the second period would be for the Addicks to try to hold their lead. But it was clear no such plan had been mentioned in the dressing room at half time as Charlton swiftly made it 3-0 minutes into the half.

Rhoys Wiggins combined impressively with Harriott down the left, and the full back sent in a delightful cross that Yann Kermogant simply couldn’t miss as he headed home and ended up in the goal along with the ball. The Frenchman gleefully grabbed the net in delight in front of the travelling fans as he took his tally for the season to double figures.

Barnsley rallied in search of a route back into a game where they really hadn’t been at the races. Dagnall was looking to be the home side’s biggest threat, and for the second time of the afternoon Hamer had to be on his toes to beat away a swerving drive from the forward. Set-pieces were also looking to be a danger to the Addicks net, and captain Stephen Foster met a corner well but was denied by Hamer again as the natives grew restless.

The hour mark was approaching and the game seemed to be all but over as the clock did reach 60 minutes. The tireless Pritchard did well to work himself some space in the centre of the field, before laying the ball to Harriott who stylishly cut inside and fired through  the below par Steele to make it 4-0 and seal the game.

The frustration of the home side was clear  and central midfielder Stephen Dawson didn’t help his side’s cause moments afterwards as he rashly slid into Kermogant leaving referee Geoff Eltringham with no option but to produce a red card and give the player his marching orders.

With a game away at Cardiff on Tuesday night, Powell took the opportunity to relieve both Kermogant and Jackson of their duties as both left the field to a standing ovation from the travelling contingent. That left Obika and Gower to enter the fray with twenty left to play.

The fresh legs of Obika had an immediate impact, as he set up Fuller who wastefully shot astray. The man on loan from Tottenham then could have had a goal of his own, but he dragged his shot wide of the mark.

It was clear that there were more goals to be had, and Charlton soon turned their goal difference into positive figures as third substitute Salim Kerkar claimed his first goal for the club. The Barnsley defence were struggling to contain Obika, and when his shot was blocked, Kerkar raced onto the loose ball to slot home and make it five.

A terrible afternoon for the Yorkshire side got even worse as left back Tom Kennedy was dismissed after clumsily bringing down Fuller, and he was shown a straight red card to leave Barnsley with only nine men left on the pitch.

There weren’t many more than that in the home sections of the ground as the game came to a close, and there was still time for Fuller to grab a deserved goal as he capitalised on some more sloppy defending after Pritchard was thwarted by Steele. The Jamaican took the ball down well before curling it into the bottom right corner, and referee Eltringham soon brought the game to a close after the restart.

Another outstanding away performance was complete, and Powell and the players were given a rousing ovation as they made their way down the tunnel in front of the 600 strong travelling fans. Not even the most optimistic of Charlton supporters would have predicted such a scoreline prior to the game, but there was no doubt that it didn’t flatter the visitors.

Last month some fans were worried about relegation after a 2-0 defeat at home to Millwall, but such worries now seem a distant memory. A tough game on Tuesday night down in Cardiff awaits, but there’s no reason why this side can’t get a positive result from that game. Whisper it quietly, but Charlton now find themselves six points off the play off places with four games left to play. However, it is more likely that a top half finish will be more realistic and undoubtedly exceed expectations that supporters held at the start of the season.