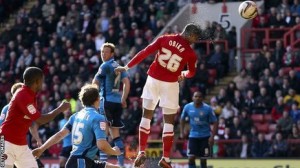 A late goal from Jonathan Obika secured a vital victory for Charlton over Leeds United on Saturday afternoon at The Valley. The man on loan from Tottenham rose highest in the penalty box to head home a last gasp winner and earn his side all three points. The scenes at the final whistle showed just how important the win was, but it could all have been so different. Charlton captain Johnnie Jackson had given his side the lead early in the second half before Luke Varney had grabbed what looked to be the final goal of the game to break Addicks hearts, but it was Obika who stole the show and sealed an outstanding win.

Home manager Chris Powell made just the one change to the side who had fought so bravely away at Brighton in the week. Ricardo Fuller came into the side to partner Yann Kermogant up front as the Addicks looked to attack. Ben Hamer kept his place in goal, with Chris Solly and Rhoys Wiggins flanking Michael Morrison and Dorian Dervite. The Frenchman keeping his place in the lineup after a stellar midweek performance.  Ahead of them were Jackson and former Leeds midfielder Andy Hughes, with Callum Harriott and Bradley Pritchard out on the wings.

The visitors chose Ross McCormack and Steve Morison to lead the line, and the latter almost put his side ahead in the opening stages. Quick thinking from Paul Green presented Morison with an opportunity, but the former Norwich forward was denied by Hamer. At the other end, Kermogant tested Kenny for the first time of the afternoon as both sides made a bright start to the game.

Ex Crystal Palace and Ipswich midfielder David Norris was named in the centre of the park for the Yorkshire side and he gave away a cheap foul which allowed Jackson to put the ball in the box. Keeper Paddy Kenny did well to thwart Dervite as he turned and shot, before Morrison blazed  the rebound over as a big chance went begging for the hosts.

Paul Green found himself with time and space after being set up nicely by McCormack as the clock reached the half hour mark, but the Irishman wastefully skied his effort. Charlton were looking at their best when attacking the opposition full backs, and Harriott got the better of fellow youngster Sam Byram before firing into the side netting as chances continued to come – and go.

At the interval, both sides looked set to cancel each other out. But straight after the break the breakthrough came, and it was a familiar face who got it.

Ricardo Fuller surged forward down the right, and when his cross was cleared Andy Hughes ventured forward and met the ball nicely from distance. The shot was charged down and penalty box pinball ensued, before the ball broke to Jackson who took one touch and crashed the ball past Kenny to put his side one nil up.

The South Londoners were in the ascendancy and the lively Harriott surged forward again, the youngster conjured up a dangerous low cross, but there was nobody in the centre to meet it and the chance went begging.

Veteran Andy Hughes was having another eye-catching game. The experienced midfielder retained his place after impressive performances at Brighton and at home to Bolton last week, and he put his body on the line to deny Green a clear sight at goal.

That intervention signalled the start of a Leeds onslaught as the managerless side threw everything forward in an attempt to salvage something from the game. Michael Tonge’s effort was blocked by one of his own teammates before Morison shimmied away from the Addicks defence and fired a fierce shot against the outside of the right hand post.

It was an all too familiar story for the home crowd, as the away side found themselves back in the contest during the final ten minutes. In similar fashion to the home side’s goal, the ball pinged around in the box after Charlton failed to clear, and substitute Luke Varney had no hesitation in firing past Hamer before wheeling away in front of a jubilant away end.

As the celebrations went on the home side surrounded referee Stuart Atwell, adamant that the ball had struck a hand in the build up, but the official waved away the protests.

The unlikely face of Chris Solly emerged on the right hand side of the penalty area, not once, but twice in the space of seconds. First Pritchard did well to find the fullback who powerfully drove agonizingly wide, before  he got another bite at the cherry soon after, but the shot was excellently blocked on the line and the away defence managed to scramble the ball to safety.

The game looked to be heading for a draw, as the allotted four minutes were up. There looked nothing on when substitute Kerkar picked up the ball from a Wiggins throw. But the Frenchman produced a sublime ball into the area and Obika was there to crash the ball home as the roof nearly came off The Valley.

There was barely time to restart play, and when the referee brought the game to a close the faces of the players and management and the roar of the crowd told you just how important the win was. The Valley hasn’t exactly been the happiest of homes this season, but with two home Saturday wins on the bounce, it feels as if Charlton have clicked at just the right time.

Manager Powell ensured he shook everybody’s hand before leaving, and when he did, the crowd were treated to the famous tunnel jump routine that they had been starved of in recent times. A fantastic win, a fantastic team, and a fantastic manager.