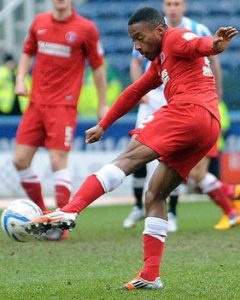 Harriott grabs his first senior goal to give Charlton the points

A solitary goal from Callum Harriott – his first in senior football, was enough to help Charlton to three vital points over Huddersfield on Saturday. The winger fired home a low shot just three minutes into the contest and the Addicks went on to see the game out to continue their fine away form and clinch a first clean sheet since early December.

Chris Powell kept the same 4-4-2 formation that his side had played on Tuesday night at Peterborough. David Button continued in between the sticks for the away side, with Chris Solly and Rhoys Wiggins flanking Michael Morrison and Matt Taylor. Callum Harriott and Lawrie Wilson were named out on the wings, with skipper Johnnie Jackson and Bradley Pritchard in the middle. The front two remained the same, as Danny Haynes partnered Ricardo Fuller up front.

The visitors started the game on the front-foot, as Harriott sped down the wing early on and teed up Haynes whose shot was deflected behind for the Addicks to win the first corner of the contest. Early pressure continued and Charlton were rewarded for their fast start with a goal.

After a free kick was won over on the left, Chris Solly quickly slipped the ball into the path of Harriott who took a touch and blasted the ball low and beyond Huddersfield keeper Alex Smithies. The goal was Harriott’s first in senior football and the youngster wheeled away in delight as the travelling red army behind the goal rejoiced

Having got an early goal away from home, Charlton knew that they know faced a tough challenge to hold onto their lead. Former Crystal Palace and Leicester midfielder Neil Danns tried his luck from range, as the ball fizzed past the post to keep Button on his toes.

The keeper had to be alert to preserve the lead moments afterwards, as Peter Clarke rose highest at a corner to head the ball towards goal, with Button tipping over.

The plan seemed to be to soak up the home side’s pressure and hit them on the counter attack. The pace of both Haynes and Harriott would therefore be key, and the two linked up nicely before the former just misplaced his pass out of the reach of the onrushing Ricardo Fuller as the clock reached 20.

But lackluster defending from the Addicks almost cost them a goal when a Huddersfield set piece was taken quickly into the path of fullback Paul Dixon, who was allowed time and space to pick out Theo Robinson, and his header seemed destined for the net, but Button wasn’t to be undone and managed to tip the ball over once more.

Quick counter attacks from the visitors were becoming a common feature of the half, and after they’d won a corner on the right, Wilson’s ball found Haynes who misjudged his header to skew the ball back in the direction it had come from. Breakaway number two soon followed, as Wilson fed Harriott down the left, who threaded the ball through to the fleet footed Haynes, who was agonisingly denied by Smithies.

There was still time for Charlton to go close to grabbing a decisive second minutes before the interval. This time Jackson’s free kick was glanced goalwards by Wilson, whose header was somehow cleared off the line by Clarke. Penalty box pinball ensued, with Pritchard’s shot almost flying in off Town defender Antony Gerrard, Smithies again denying the Londoners.

Smithies’ opposite number Button was sharp to deny Adam Clayton a spectacular goal down the other end as the referee signaled for half time.

The second period wasn’t spectacular but it was ideal for the visitors who were looking to hold onto their lead. Early pressure from the Terriers saw Novak fire high over the bar after Button had spilled a free kick, before recently installed manager Mark Robins brought on Ward and Alan Lee for Theo Robinson and Oliver Norwood in a bold and attacking move.

It was all about containing the opposition for Charlton, and when Powell replaced Fuller with defensive midfielder Dorian Dervite midway through the half, it was clear that the game plan was just that. Goalscorer Harriott was then replaced by Cedric Evina to offer defensive aid to Rhoys Wiggins on the left as the game entered the final ten minutes.

Half chances for the visitors followed, as Jackson’s corner fell to Taylor who saw his effort blocked as the game began to peter out. Haynes was brought off for the fresh legs of Obika on 88 minutes as the Londoners looked set to be heading south with all three points.

The fourth official’s indication that there was to be a minimum of five minutes of added time to be played was met by groans in the away section as the Addicks were pinned back inside their penalty area for the remainder of injury time.

Town sent up keeper Smithies in a nail biting finale as the ball was pumped back into the area. The keeper had the ball snatched off his toes by Dervite, and when one final long ball was claimed by Button the referee brought the game to a close to give Charlton three important points.

The win all but secures the Addicks stay in the Championship for another year as they continued their fine form on the road. But with South London neighbours Millwall in town next Saturday, Charlton fans will be hoping that the home form can turn itself around from now until the end of the season, and if it does, the Addicks should finish in a respectable position in the league in their first season back in the Championship.

View from the Dugout:

Terriers chief Robins was left frustrated after his side failed to build on their impressive win in midweek, saying: “We were brilliant on Tuesday, but today we’ve been undone by a set piece.” The manager also went on to reflect on his side’s style of playing, stating: “We didn’t have enough quality, we got the ball in their box plenty of times, and although it wasn’t ideal, needs must at times.”

A jubilant Powell praised another hard working performance: “It was hard-earned, but I’m really pleased with the performance of my players.” He went on to say: “We had the perfect start. We countered well, but we knew the pressure would come in the second half. Every player played their part and showed a real desire to keep the ball out of the net.”