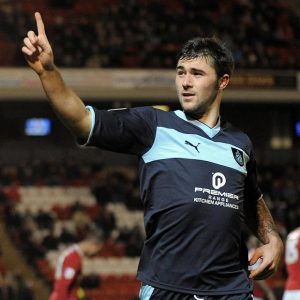 Charlie Austin was the difference between the sides

Charlie Austin settled the contest at The Valley on Saturday afternoon as Burnley claimed a vital win over mid table counterparts Charlton. The game’s only goal came minutes before the interval, as the prolific frontman cut in from the left and unleashed an unstoppable shot past David Button.

Try as they might, Charlton couldn’t get themselves back into the game and the loss only adds to their poor home form this season. In fact, the result means Charlton’s home record is the worst in the division, and as uneasiness begins to grow in SE7, it could be a nervy run in from now until the end of the season.

In a bid to stem the flow of poor home performances Chris Powell gave the side a shake up. A rare start for David Button caught the eye, as he stepped in for usual keeper Ben Hamer in the home goal. In defence, Lawrie Wilson was handed the right back position, with Leon Cort and Micheal Morrison in the centre, and Rhoys Wiggins at left back. It was all change further up the pitch, as Dorian Dervite, Johnnie Jackson, and Bradley Pritchard were named as the midfield trio. Ahead of them, Powell opted to position Danny Haynes and new loan signing Jonathan Obika either side of Ricardo Fuller

Sean Dyche named an equally attacking side as his players went in search of their first win in seven matches. Junior Stanislas and Fulham loanee Alex Kacaniklic were named out wide for the Clarets, and Martin Paterson and Charlie Austin provided the goal threat for the away side.

It was Paterson who started the game the brighter of the front two, and he did well to work himself some space early on before firing over. Burnley put pressure on the ball from the outset, and when Danny Haynes lost possession in midfield, Paterson latched onto a fine through ball from Stanislas to roll the ball into the net, but luckily for the hosts the offside flag was up.

Charlton soon fashioned a chance of their own, as target man Ricardo Fuller did well to win an aerial battle with the Clarets defence, before finding Wilson who crossed deep from the right to find Haynes who glanced the ball just wide of the post.

The Londoners had started brightly, and when Michael Morrison headed Jackson’s corner down into the path of Haynes, Burnley keeper Lee Grant did well to tip the ball up and over his crossbar. The set pieces of Jackson were proving to be a thorn in the side of the visitors, and this time Leon Cort connected well with another delivery, but the ball sailed through the crowded penalty box and away from danger.

At the other end, the Charlton defence left the dangerous Alex Kacaniklic to his own devices out on the right, and the winger almost made them pay as he fired in a low shot that Button did well to parry.

Burnley were starting to edge into the game, and the familiar face of Kacaniklic was causing Wiggins all manner of problems down the left hand side, and for the most part the home defence had done well to snuff out the threat of 24 goal man Austin.

That all changed as the match approached the break however, as Austin collected the ball out wide on the left there seemed to be no danger. Cue the striker to cut inside unerringly and fire an outstanding effort out of the reach of Button into the top corner. The away end was delirious – the other three sides of the ground were stunned into silence.

It almost got even worse for Charlton before the break, as Paterson’s effort cannoned back off the bar in the last act of the first half. The whistle was greeted by discontent and even some boos from some sections of the crowd as the players retreated down the tunnel.

A fast start was needed in the second period if Charlton were to get anything from the game, and they began the half brightly. The game had seemed to have passed Pritchard by in the centre of the park, but he forced a good save from Grant as his volley was turned behind. From the resulting corner Obika was agonisingly close to making contact with the ball in the box, as chances began to come the home side’s way.

Keeper Lee Grant had to be alert as the game reached the hour, good hold up play again from Fuller allowed him time and space to spread the ball out wide to the marauding Wilson. The right back galloped forward  and only had one man to aim for in the box. His cross found that man, Danny Haynes, and his downward header was thwarted by Grant as the Addicks began to grow increasingly frustrated.

You sensed that there was joy to be had out wide if the home side could exploit the space, and Powell quickly acted by bringing Callum Harriott and Danny Green on in place of Obika and Dervite.

Charlton continued to threaten from set pieces, and substitute Green floated in an inviting ball that was flicked on by Haynes before somehow being poked wide by Morrison as half of the stadium got ready to celebrate an equaliser.

The away side were defending admirably, as Austin’s wonder strike looked set to decide what had been an even contest. Five minutes of added time were announced to offer a glimmer of hope, but Charlton couldn’t conjure up any last hurrah as another home game ended in a disappointing defeat.

View from the Dugout:

Chris Powell was left understandably frustrated  as the manager said: “We should have got something from the game, we asked questions but they answered them”. But the manager stressed the importance of the next two games, both away from home, where Charlton have been strong and said: “This is a crucial week with games against Peterborough and Huddersfield, and we must pick up something from those games”. This is all too true, the next two games are vital, positive results should help ensure safety for the season, but negative ones and the nerves may start to kick in as the season reaches the business end.

In contrast with his opposite number, Dyche was left jubilant after his side ended their torrid run of form and grabbed their first goal in 348 minutes of play. “I think that’s the best result I’ve seen as a manager” and he went on to say “The performance was terrific, and we’re improving in several ways. It was some goal”.