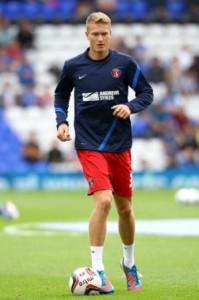 Charlton U21’s ran out convincing 4-0 winners against Cardiff City on Monday afternoon at Sparrows Lane and in doing so kept themselves at the top of the Development League 2 Table. A youthful Charlton side scored four without reply, with the clinical Micheal Smith helping himself to a brace, and Callum Harriott and Kevin Feely also getting themselves on the score-sheet.

Coach Nathan Jones named young keeper Nick Pope in between the sticks, with fullbacks Morgan Fox and Harry Osborne at left and right back respectively  In the centre, the duo of Semi Ajayi and Kevin Feely helped the home side to an impressive clean sheet. The midfield responsibility was handed to Jordan Cousins and skipper Bradley Jordan, with the fleet footed Callum Harriott and Courtney Harris on either flank. Ahead of them, Joe Pigott and Micheal Smith led the line impressively for the Addicks.

The notable inclusions in the away side were first team players Kadeem Harris out wide and their skipper for the game Joe Ralls in the centre of midfield. Up front, the Bluebirds named Slovenian international Etien Velikonja, as they attempted to do the double over the home side.

The game got off to an even start, with both teams wasteful in possession as the sides tried to get a foothold in the match. Ten minutes in Callum Harriott swung in a corner from the left, and the ball was met by the towering presence of defender Semi Ajayi who could only head straight into the arms of Cardiff keeper Elliott Parish.

At the other end of the pitch, Ajayi’s centre back partner Kevin Feely had to be alert to thwart Filip Kiss’s surging run at the Addicks defence, a solid defensive partnership that was to provide the foundations of an impressive team performance.

Link up play between Pigott and Smith followed shortly afterwards as the home side grew into the game. A succession of corners taken by Harriott followed but for all their endeavor Charlton couldn’t find the breakthrough.

However, for all their attacking impetus Charlton had to be wary of their opponents on the break, and Kadeem Harris was proving to be a handful. Right-back Harry Osborne did well to initially keep pace with the winger, but he was brought down on the left hand side, presenting an opportunity for the Welshmen. Quick thinking from captain Joe Ralls gifted Velikonja a chance to open the scoring, but he blazed over.

A wave of Cardiff pressure was to follow. Full back Luke Coulson surged down the right before jinking inside and unleashing a powerful drive towards goal that Nick Pope did well to tip over as the game reached the half hour mark. The same man did well to get to the byline five minutes later, before his cross was wastefully headed over by Velikonja.

Then against the run of play the home side took the lead minutes before the break. After Harriott had done well to work himself some space and slip in striker Pigott, Michael Smith was on hand to turn in his strike partner’s rebound to put the hosts ahead at a crucial time in the match and send the Addicks in ahead at the break.

The goal before half time noticeably knocked the stuffing out of a Cardiff side who could feel hard done by to be a goal behind. In contrast, Smith’s goal seemed to galvanize the hosts as their second half showing added a classy look to the scoreline.

The impressive Morgan Fox enjoyed a fine second half of football, and the full back linked up well with the Charlton trialist before he fed Smith who drove forward with power and purpose before firing wide. Fox found himself down by the corner flag again as the clock reached the hour mark, and his ball into the middle was met well by Courtney Harris who saw his effort saved by Parish.

The game looked to be heading only one way and the hosts soon doubled their advantage as defender Feely did well to salvage an over hit corner before picking out Harriott on the edge of the area. The tricky winger ducked and dived his way in between the Cardiff defenders before dispatching a low drive in off the post to give Charlton some breathing space in the contest.

No sooner had the hosts scored a second, than they were presented with an opportunity to grab a third. Eye catching hold up play from Smith deceived Cardiff centre back Deji Kiss who clumsily brought down the striker. The same man picked himself up to fire the ball high into the top left hand corner to give the Addicks three and himself a second of the match.

Charlton went on to see the game out well with Fox and Harriott continuing to catch the eye with their link up play down the left. The latter almost saw his corner creep in from the right as Parish could only tip over. From the resulting set piece skipper Bradley Jordan whipped in another dangerous ball to allow Feely to head back across into the goal at the far post for 4-0 and seal an outstanding win.