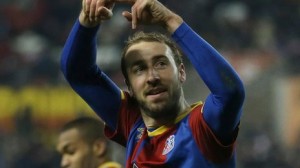 Two second half goals from Glenn Murray were enough for Crystal Palace to see off Charlton on Saturday afternoon as the hosts claimed only their second win in twelve matches. Charlton had gone ahead early in the first half through a superb solo goal by Ricardo Fuller, but for the second time in a week Powell’s men were unable to hold onto the lead in a game of two halves.

Chris Powell made three changes to the side that had faced Sheffield Wednesday at The Valley a week earlier. Leon Cort came back from injury to replace Matt Taylor at the heart of the Addicks defence, and former Crystal Palace striker Ricardo Fuller was brought in at the expense of Yann Kermogant. The third change was the inclusion of Dorian Dervite who was deployed in front of the back four to play in the holding midfield role. Chris Solly and Cedric Evina continued in the full back positions, with Jackson, Wilson, Pritchard and Wagstaff ahead of them in midfield.

It was the visitors who came flying out the blocks, roared on by the vocal backing of 3000 travelling fans. Dorian Dervite won Charlton a corner in the first few minutes of the game, and Leon Cort met Jackson’s corner well, but his header sailed over the bar.

Charlton’s good early pressure continued, this time Bradley Pritchard strode forward and played in Lawrie Wilson. But the winger’s effort was blocked and half hearted appeals for handball were waved away by referee Mark Halsey.

The Addicks had to be wary of a counter attacking threat of both Yannick Bolasie and new Manchester United signing Wilfred Zaha on either wing, but Chris Solly put in a superb crunching challenge on the latter that left the winger visibly shaken whilst still managing to win the ball fairly.

After making the better start to the game Charlton burst into life going forward again shortly afterwards and deservedly took the lead. A ball forward by Solly was taken down expertly by Fuller as he powerfully drove into the box. The Jamaican forward sauntered past Delaney before firing an unstoppable shot through Julian Speroni to put the South London side ahead and set off wild celebrations across the other side of the field in the visiting section.

Concentration was key if Charlton were to keep hold of their one goal advantage, and there was a nervy moment when Ben Hamer and Cort bumped into each other before the keeper claimed the ball. Other than that scare Charlton were doing a fantastic job in keeping the front three of Zaha, Bolasie and Murray quiet as the clock reached the half hour mark.

But the away side remained a threat going forward and had three guilt edge chances to add to their lead before the break. The first came from another corner as Jackson again whipped the ball in from the right and Cort rose highest but his header flew agonizingly over the bar after the defender was presented with near enough an open goal.

The second chance arose from another great flowing move as Pritchard charged round the back of Wagstaff before delivering the ball on a plate to the skipper who was thwarted again by Speroni. The third and final chance of the half came from what was undoubtedly the move of the match. Wagstaff and Evina combined well on the left before the defender swung in a teasing cross that was knocked down by Wilson and headed wide by Jackson as the travelling fans were ready to celebrate again.

You began to get the feeling that Charlton may live to rue those missed chances but as the half time whistle went boos echoed around three quarters of Selhurst Park, the other quarter gave their team a standing ovation as The Addicks went in deservedly ahead at the break.

Ian Holloway brought on the experienced Kevin Phillips at the break as his side went in search of an equalizer  The well traveled forward was a deadline day loan acquisition until the end of the season, and the striker made an immediate impact on the game as he teed up Zaha who curled the ball wide.

But there was still no real threat from the home side as the contest reached the hour mark. Fuller battled hard for possession again before curling a wonderful effort towards goal, just as the ball looked to be dipping in the Argentine did well to tip the ball over and deny the front-man a second of the game.

Ben Hamer was finally called into action moments afterwards as Phillips sprung clear and forced a smart save from the Charlton keeper, and as Wagstaff tested Speroni again up the other end, Holloway made his two final substitutions as fellow new singing Dobbie joined Phillips on the pitch, along with the promising Johnny Williams as the Eagles went in search of a route back into the game.

The changes reaped rewards for the hosts and they got their equalizer with fifteen minutes to go. Dean Moxey played in the prolific Glenn Murray who kept his cool to drill the ball across Hamer and into the far corner of the net.

A wave of Palace pressure began to build as the home side finally found their rhythm. Stephen Dobbie brought the best out of Hamer before Murray struck again three minutes later to edge the Eagles in front. The league’s top scorer was given time and space to bring the ball down in the box before netting his 24th goal of the season to give his side the lead.

The goals resulted in Powell bringing on Danny Haynes and Yann Kermogant in search of a second goal but the two goals from Murray had visibly stunned a side who had seemed so in control for the majority of the game.

One final throw of the dice saw Michael Morrison find Pritchard in the box, but his half volley didn’t trouble Speroni. Murray could have had a hat trick if he’d been able to keep his composure, but he fired wide and the game came to a close.

The defeat is the second time in as many matches that Charlton have thrown away a one goal lead late on. However the first half performance was the best many had seen the side play all season, and the key for the Addicks is to start closing games out and finding their killer instinct.