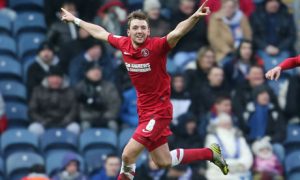 Charlton heaped more misery on an under-achieving Blackburn side on Saturday and lifted themselves into the top half of the table. A wonder strike from Dale Stephens and a perfectly placed header from Yann Kermogant was enough to cancel out a Jordan Rhodes header and see off Blackburn on a freezing afternoon at Ewood Park. The performance was a familiar one for the travelling fans as Charlton produced another gritty and determined display away from home.

Powell sent out an unchanged side, with the trusted 4-5-1 formation as the Addicks went in search of their third win in as many games in 2013. This meant Matt Taylor partnered Michael Morrison in defence, with Cedric Evina and Chris Solly marshaling either side at full back. In between the sticks, Ben Hamer retained his place, while ahead of them were the midfield trio of Jackson, Pritchard and Stephens, with Lawrie Wilson and Scott Wagstaff providing the width for the side, up top, Yann Kermogant was chosen to lead the line.

In contrast to the settled and balanced nature of the visiting side, Blackburn looked far more disjunctive, with the club introducing new manager Michael Appleton to the crowd as the teams took to the pitch. In his programme notes Appleton had said: “The players have worked hard all week and are in a good frame of mind”, but this wasn’t evident on the pitch over the next ninety minutes as they were put to the sword by another clinical Charlton display.

The game was cagey in the opening period, with both sides battling for supremacy in the midfield but the first chance of the game fell to the home side from a set piece. Simon Vukcevic combined well with Chelsea loanee Todd Kane, and they won their side a corner early on. A dangerous delivery from midfielder Ruben Rochina followed, and it was met by the head of Colin Kazim-Richards, but the ball soon ended up in the grateful grasp of Ben Hamer as the Addicks survived an early scare.

What followed on twenty six minutes was a moment that made the long trip for the travelling fans more than worthwhile. Dale Stephens has a reputation for not scoring too often, but when he does, they’re usually something special. This was picked up from a certain section of the crowd as the midfielder took aim, and before they even got the chance to finish the song, the ball flew into the top right hand corner and past the helpless Jake Kean to put Charlton ahead. It was a stunning strike, subsequently earning him the goal of the day award on Sky Sports, and it was certainly a moment to savor.

Buoyed by the goal, Charlton came flooding forward again moments later, this time Stephens was the architect as he played a defence splitting pass through to Jackson, who was foiled by Kean. The ball almost fell kindly for Kermogant, but the Rovers defence were able to scramble the ball to safety as the natives grew restless.

A tremendous first half for the visitors was seen out by a tireless performance off the ball from every player and the Addicks went in at half time a goal up, and were good value for their lead.

But the lead evaporated just minutes into the second half, as the familiar face of Jordan Rhodes dragged his side back into the game. Good work down the right from Kazim-Richards ended in him crossing to Rhodes who guided the ball past Hamer with a deft diving header for one all.

The Ewood Park crowd suddenly began to get behind their team, but it was Charlton who could have been ahead for the second time in the contest almost immediately. The Rovers defence failed to clear, and Pritchard came flying in to meet with the loose ball, but he was thwarted by Kean. The ball fell to Stephens who had the goal at his mercy, but he sliced it wide – he doesn’t do simple goals.

Sustained Charlton pressure was eventually rewarded with a goal as the game reached the hour mark. Cedric Evina had looked dangerous going forward all afternoon, and he linked up well with Wagstaff to earn the visitors a corner  Nothing came of it initially, but the move was rescued by Jackson over on the right as the skipper laid the ball back to Pritchard. The midfielder sent in a high cross that was met by the head of Kermogant, and as the ball looped into the bottom right hand corner of the net, the Frenchman wheeled away in delight in front of the jubilant travelling Addicks.

It could have been a level contest again shortly afterwards after a lack of concentration almost cost the Londoners dearly at the other end. Kazim-Richards was allowed to ghost into space and fire a header towards goal, but Hamer was on hand to see the ball wide and preserve the Addicks lead.

As the game went on the crowd began to vent their frustration, with some even leaving early as the clock barely reached 80 minutes. Appleton threw on the experienced Pedersen and the well traveled Nuno Gomes in a bid to salvage something from the game, as Powell sent on Dervite in place of Wagstaff as Charlton looked to preserve the points.

The hosts piled on the pressure in the closing stages, as Rhodes headed over as the game crept into injury time. There was still time for Martin Olsson to fire over after a good punch from Hamer, but that was all she wrote as Charlton held on for another superb away victory.