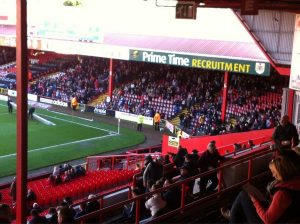 The Travelling Addicks at Ashton Gate

Goals from Danny Haynes and Michael Morrison sealed an impressive 2-0 win at Ashton Gate for Charlton on Sunday. The visitors dominated the game for large spells and the win heaped more pressure on under-fire boss Derek McInnes after his side’s seventh straight defeat. The win for Charlton was the fifth game in a row that they had avoided defeat away from home, and the first time they’d recorded back to back wins in the Championship for five years.

Chris Powell made one change from Tuesday’s pulsating 5-4 win at home to Cardiff City. Dan Seaborne,  signed on loan from Southampton, started at left-back, allowing Chris Solly to revert to his favoured right back role. In between the sticks was Ben Hamer and the ever present duo of Leon Cort and Michael Morrison were re-united at the heart of the defence whilst Salim Kerkar, Johnnie Jackson, Dale Stephens and Bradley Pritchard started in the midfield. Up front, Danny Haynes partnered Rob Hulse, after the former Bristol City man’s electric performance on Tuesday night.

The first chance of the game fell to the home side. After good work down the right from Albert Adomah, the ball was fizzed low into the area, and when Martyn Woolford connected with the cross Chris Solly was on hand to provide a superb block to keep the scores level.

A similarly sharp counter attack followed from the visitors, and it was Danny Haynes who sped away down the Addicks right, his ball found Salim Kerkar on the opposite side of the pitch, and Tom Heaton had to be alert to deny the former Rangers man.

After continued probing from the visitors, they found a way through on 20 minutes. A wonderful flowing move ending in Dale Stephens letting fly from 25 yards, and when his shot flew back off the post, Haynes kept his cool to hammer home the rebound.

The goal was no more than Charlton had deserved, and Haynes went agonisingly close to doubling his tally shortly afterwards. Bradley Pritchard did well to head the ball down to Haynes, whose drive cannoned back off the outside of the right hand post.

The home side continued to look menacing on the counter attack with the pace of Adomah and Baldock looking to be their biggest threat. The two combined to set up Adomah  but Hamer was alert to rush out and smother the ball at the feet of the former Barnet winger.

Charlton also looked a threat on the counter attack, and when Bradley Pritchard was sent flying by a rash challenge from Matthew Briggs, the resulting free kick culminated in Leon Cort going close after his shot was deflected wide. The Londoners were given a standing ovation by the travelling contingent at the interval  in stark contrast with the boos that were directed towards the home side as the Addicks ended the half in the lead.

The second period started with Charlton on the front foot once more. On this occasion Haynes failed to keep his composure after a delightful ball from Kerkar had sent the fleet footed front-man in on goal.

Sustained pressure from the Addicks resulted in Stephens bringing the best out of Heaton just before the hour mark. After admirable perseverance by the hard working Pritchard, Stephens looked to chip the former Cardiff City stopper, but the keeper tipped the effort over and from the resulting corner Charlton went two goals to the good.

Bristol City’s defending left something to be desired, and after Ryan Taylor made a meal of the clearance, Kerkar found centre back Michael Morrison who shimmied past two defenders before stylishly slotting past Heaton for 2-0.

The defending from the home side was proving to be their downfall, and sloppy play at the back allowed Pritchard to try his luck from range, but Heaton held the ball well. The pace of Haynes had caused the Robins back-line all manor of problems as the game wore on, and he almost capitalised on some hesitant play from captain Liam Fontaine the natives grew restless.

After McInnes brought on Jon Stead and Steven Davies the home side created a promising spell of their own. Adomah’s effort flew high and wide, before both Seaborne and Morrison had to be alert to preserve the Addicks clean sheet – both centre backs blocking efforts on the visitors goal.

The last of the action saw Solly on hand again to clear the ball away after Hamer failed to collect from a cross, and the danger from the ensuing goal mouth scramble was thwarted by the ever reliable defender, as Charlton sealed their second win in a row.

The win lifts the Powell’s men up to 16th in the league table – and his celebrations on the pitch following the final whistle showed just how much it meant to the man the fans adore. After last Saturday’s home defeat to Middlesbrough some fans where calling for Powell to be sacked, but after two fine performances and six vital points the mood seems to have changed drastically. What a difference a week makes.