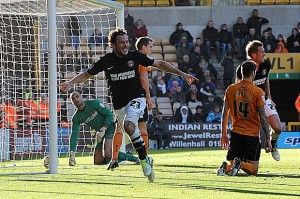 Wilson celebrates his first goal for the club

Lawrie Wilson’s first goal for Charlton earnt the Londoners a well deserved draw at Molineux on Saturday. After falling behind early on, Charlton showed grit and determination to battle back and earn themselves a point. Perhaps they could have had all three, but as was the case on Tuesday at Leeds, the Addicks found themselves wasteful in front of goal.

Chris Powell opted to go with the 4-4-1-1 formation that had served his side so admirably at Elland Road during the week, and it was the visitors who started the game the brighter. Lawrie Wilson tried his luck from range, and then Dorian Dervite did likewise, but his volley went wide of the post. The Frenchman has recently been brought into the side to act as a defensive midfielder, and grabbed himself his first goal at Elland Road in midweek.

But Charlton’s game plan was thrown out the window minutes later. On loan winger Jermaine Pennant crossed from the right, and the pin point delivery  was met by Bakary Sako on the half volley, who stylishly guided the ball past Ben Hamer.  The man brought in from Saint Etienne in the summer nearly doubled the home side’s advantage moments later, but this time his shot wasn’t powerful enough to trouble Hamer.

Salim Kerkar then saw his effort tipped wide by Carl Ikeme, and then gave away a needless foul at the other end. Sako stepped up again, but Hamer was equal to the effort and tipped the ball away from danger.  The hosts continued to press and should have scored when Roger Johnson headed over after beating Wilson in the air from a corner.

Charlton then created their best opportunity of the game ten minutes before half time. The ever dependent Chris Solly linked up well with Bradley Pritchard on the right, and his cross found Kerkar at the far post. The former Rangers man beat his marker well, and unleashed a wonderful curling effort that skimmed the side netting as it flew just wide of Ikeme’s goal.

Wolves manager Stale Solbakken brought another of his new signings, Bjorn Sigurdarson, on in place of Ebanks-Blake in the second period in the hope of extending his side’s lead,  the Addicks took the game to their hosts in the second half ; but not before they got away with a dubious decision by the official ten minutes after half time.

Dervite was the culprit of being sloppy in possession  and as he gave the ball away a flurry of Wolves players surged forward. The ball reached Pennant on the right hand side, and after a scramble in the box the ball fell to Tongo Doumbia. He let fly and his shot was destined for the bottom corner, but was blocked by Doyle on the line as the linesman subsequently gave offside.

It was about to get even worse for the hosts, as Charlton levelled the scores minutes later. Cedric Evina produced a superb cross from out wide on the left, and the ball was met by striker Rob Hulse.

The man on loan from QPR could only watch as his volley came back off Ikeme and then the post in quick succession – but Wilson was on hand to tuck away the loose ball and as he raced away in delight the 1000 strong Addicks tucked way up in the corner of Molineux were able to celebrate.

The momentum was with the Addicks and as the fans were still rejoicing up the other end, their team could and in all honesty should have gone in front. Solly’s neat play down the right created space for a cross, and the ball fell to Hulse again, but he was denied by the woodwork once more as his header came back off the post.

The lone striker was managing to do everything but score, and Wilson presented him with another chance to open his Addicks account, as his through ball found the striker’s stride perfectly. But as he raced into the box he took the ball away from goal slightly and forced a save out of Ikeme again from a tight angle.

Wolves were still looking ominous going forward, and after Hamer was alleged to have handled outside the box on 80 minutes, Sako was presented with another opportunity to double his account for the day. The travelling contingent held their breath as the Frenchman stepped up to take the free kick, but the ball was well held by Hamer. The keeper then had to be alert to deny Doumbia again after a long throw wasn’t cleared by the away defence.

As the clock reached 90 minutes the last chance of the game fell to Charlton. The visitors carved open the shaky Wolves rearguard yet again down the right, and Solly stood the ball up invitingly for Hulse, who somehow managed to head the ball wide after being given the freedom of the 6 yard box.

As the referee brought the game to a close, Solbakken and his side were subject to boos from the home fans, highlighting how well the visitors had done against their strong opponents. Another brave and defiant performance away from home gave the Addicks another point to add to their tally, the key for Powell’s side is to address their home from – and if the boss and his players can do that, there is no reason why Charlton can’t begin to climb the table.