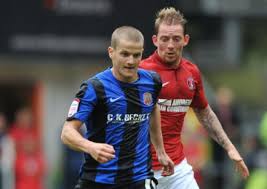 Charlton slumped to defeat on Saturday afternoon in front of a bumper crowd at The Valley. After a sterling performance at Blackpool two weeks earlier, the home side were unable to secure a second straight win. Instead, it was the visitors who left South London with all three points. Barnsley dominated for large periods of the game, and few could argue that they deserved their victory.

Charlton fielded the same eleven that had started at Bloomfield Road, with manager Chris Powell deciding to stick with the system of 4-5-1 that had served his side so well in recent matches. It was the home side who went closest early on, as Manchester City loanee Abdul Razzak fired wide after some nice link up play with lone striker Ricardo Fuller.

Barnsley then had two chances of their own, as both Stephen Dawson and Jacob Mellis failed to find the target from range. The stand out performer in the Tykes ranks was midfielder David Perkins, and his quick feet and pass found former Derby man Tomasz Cywka but he also produced a lacklustre finish.

The Yorkshire men continued to impress, and carved the Addicks rearguard open again just before the half hour mark as Curtis Davies’ powerful strike was well defended by Micheal Morrison. The striker then set up another chance for the away side moments later, as his cross found Chris Dagnall  inside the area, but the well travelled football league striker failed to apply the finish.

The home side finished the half more strongly however, and after Danny Green was brought down by Cywka, Razzak stepped up to dispatch a wonderful curling free kick, but the strike was met by Ben Alnwick who saved well. There was still time for Charlton to go close again before the break, as Salim Kerkar’s fine corner was scrambled away to safety after almost creeping in at the near post.

Skipper Johnnie Jackson made his comeback from injury at half time, and he was joined by Bradley Wright-Phillips, the pair replaced Razzak and Danny Hollands respectively – the latter unable to really make a mark on the game.

The changes did nothing to weather the Barnsley storm though, and Dagnall went close again when his volley sailed just wide of the post. Leon Cort had to be alert to block Cywka’s attempt, and there was a tense feeling around the ground as the visitors continued to press.

Sure enough, they took the lead in the 64th minute when the impressive Cywka pounced on a slip by Green, and made no mistake in applying the finish past Ben Hamer. It was nothing more than Barnsley had deserved, and the 1500 strong travelling supporters celebrated in fine voice as their team went ahead.

The biggest talking point of the game came ten minutes later. Right back Chris Solly sped into the area, and collided with Dagnall, but the referee waved away the protests for a penalty, and nothing was given. The Covered End voiced their frustration, as the hosts began to mount pressure on the visitors.

Dale Stephens grabbed an attack by the scruff of the neck and powerfully drove into the box before firing wide of the post as The Valley crowd finally began to find their voices.  But the momentum was knocked significantly thereafter as the impressive Fuller was forced off with a hamstring injury. Charlton had already made their three substitutions, and so had to play with ten men for the remainder of the game.

That did not deter the Addicks though, and Lawrie Wilson drove to the byline before his cross was just too high for Wright-Phillips. Substitute Bradley Pritchard then forced another save from Alnwick as you began to get the feeling it just wasn’t to be the home side’s day.

This inclination was confirmed shortly afterwards as a goal mouth scramble resulted in four Barnsley defenders jumping onto their goalkeeper in order to keep the ball out. Pritchard then did well to hook the ball back towards goal after more drama in the box, and Hamer reproduced a penalty box cameo that fans witnessed against Crystal Palace- but Alnwick was not to be beaten, and the Addicks fate was sealed.

A frustrating afternoon in SE7 demonstrates just how unpredictable and competitive this league is. Perhaps you could argue that Charlton were overawed by the occasion somewhat, but there is certainly no time to dwell on this performance – and they will be looking to get straight back to winning ways at Elland Road on Tuesday night.