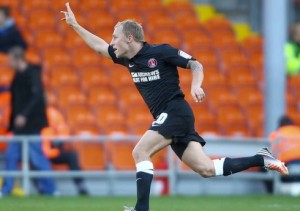 Solly wheels away in delight after his stunning strike

Goals from Leon Cort and Chris Solly sealed an impressive win for Charlton at Bloomfield Road on Saturday. After having had luck go against them in recent weeks, the performance by the sea was rewarded with three vital points that pushes the Addicks up to 15th in the table.

Manager Chris Powell opted to go with a 4-5-1 formation instead of the normal 4-4-2 that Charlton had  adopted throughout the season so far. The decision allowed Manchester City youngster Abdul Razzak to come into the side in place of Bradley Wright-Phillips, and left big man Ricardo Fuller to lead the line on his own – and he did so with some style. The defence and midfield remained the same – bar Razzak’s inclusion, and the side looked solid and assured from the start.

It was the home side who started in the ascendancy, and they could have taken the lead when former Aston Villa man Nathan Delfouneso met Tiago Gomes’s corner with a powerful effort, but Cort was able to snuff out the danger.

After good persistence from Abdul Razzak Charlton were presented with their first chance of the game -Dale Stephens’ in-swinging corner was headed over by Michael Morrison as the visitors grew into the game. The towering centre back was then on hand at the other end of the pitch to block Matt Phillips’s strike on goal after neat approach play by Taylor-Fletcher and Stephen Crainey.

Minutes later, Powell was forced to make a change to the side who had started so well. After a nasty challenge had gone unpunished by the official, Danny Green was forced to make way, and Bradley Pritchard took up his slot on the right hand side of the five man midfield.

The former Hayes and Yeading man won a corner over on the right hand side immediately  and the Addicks went closest to taking the lead from the resulting set piece. This time Salim Kerkar delivered the corner, and Ricardo Fuller managed to stoop to head the ball towards goal amongst a crowded penalty area – but the ball bounced back off the underside of the bar and the scores remained level.

There was still time for Taylor-Fletcher to come close to finding the net, as his speculative effort almost caught out Ben Hamer, followed by Phillips again trying his luck from range, but Hamer saved smartly to keep out the Tangerines.

The visitors hadn’t come to settle for a point, and they continued to endeavour to get a goal before half time. An incisive counter attack saw Razzak cross for Pritchard, and the midfielder was agonisingly close to meeting the cross from the left – but Crainey cleared well. Then, Fuller came close again when his powerful run ended with him bringing the best out of Gilks who saved well at his near post.

Shortly after the interval Charlton’s fine display was rewarded. Kerkar had Neil Eardley in limbo down the left hand side, and the former Rangers man did well to win a corner from what had looked like a harmless situation. It was Kerkar who then whipped in the corner to find Leon Cort, whose powerful header left Gilks stranded and put the Addicks into the lead. The goal was nothing more than the travelling side deserved – and they began to control the game after the goal.

Ian Holloway reacted immediately  and brought on the in-demand Thomas Ince – the former Liverpool youngster has lit up the league so far this season. But Lawrie Wilson was equal to him, and did superbly well to marshal the winger. Holloway sensed that his side would need more attacking impetus to break a solid and impressive Addicks rearguard, and sent on the experienced Kevin Phillips and pacey striker Nouha Dicko in search of an equaliser – but the League One champions held firm.

What followed was truly a moment where the travelling contingent can say ‘I was there’. As Charlton broke away incisively again, it was the ever impressive Kerkar who combined well with Razzak as he sped away towards goal. His cut back found Stephens, whose shot was blocked, and the ball bobbled out to the edge of the area.

The loose ball was met by the on-rushing Chris Solly, who unleashed a phenomenal strike that flew into the top right hand corner of the net.  The academy product sped straight back where he had came from, propelling himself down the touchline to celebrate with the fans who had voted him player of the season last year, replicating a certain Alan Shearer’s celebration, as the 900 strong Addicks could barley believe what they had just witnessed.

The home side then found themselves with a mountain to climb, and despite controlling possession for the remainder of the game, they never looked like breaching the Charlton defence. Bar Dicko’s smart turn and strike, there was never any doubt where the points were going.

The final whistle blew and the game came to a close, another fine display had finally been rewarded with a victory, and the Addicks could head home with smiles on their faces. Not just because they had achieved their first victory at Bloomfield Road since 1981, but more because of the nature of the performance that saw them outplay what will surely be a side in the hunt for promotion come the end of the season.