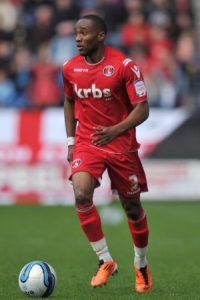 Bad news from the medical department today with news that classy left back Rhoys Wiggins has broken his foot and will be out of up to 2 months, this is a player who played more minutes last season than anyone else, and in my opinion the best left back in the league last season. Its a big loss for Chris Powell, and the team, not many wingers have got beyond Wiggins, and when he is on the overlap beyond Johnnie Jackson we have a potent weapon to supply the forward line, but one man’s misfortune is another’s gain, and the potential recipient of the good fortune could be Cedric Evina, I say potential, because I have fallen foul of the gaffer by assuming that one player would be drafted into the squad, only to be told I should assume nothing!

What do we really know about Evina’s game? I say not a lot, his appearances have been in cup games mainly and I cannot recall where he has had a run in the side, as Wiggins has been so superb. A few posters in forums are chirping that they don’t believe that Evina is up to the task, based on what exactly? on a few sporadic cup appearances? Ceddy deserves a decent run in the side, he has sat patiently throughout the past 12 months waiting for his chance to show us all what he can do, to dismiss him based on what we have seen so far is I believe unfair.

I for one can give an example of misjudging a payer based on appearances, in the 80s I used to go to quite alot of England games at Wembley, I saw one young player play a few games here and there without a decent run in the side, I announced to my friends and family that this player was not good enough for England and never would be, well the player concerned ended up winning the Golden Boot at the World Cup in Mexico in 86, played for Barcelona and became the 2nd highest England goals scorer, Yes Gary Lineker is the man i dismissed back then, now I am not saying Evina is a huge star in the making, what I am saying is he deserves his run in the side and he deserves our patience as he builds his confidence, let s just not dismiss him out of hand.