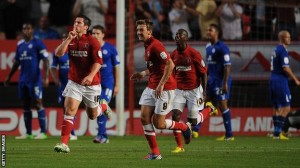 How many times as a Charlton fan have returning players been given a hostile reception and then shoved the hate down our throats with a goal? Last night the boot was on the other foot, Leicester came down determined to give Yann the boo boy treatment, fortunately the Frenchman is made of stern stuff and was able to shove the boo’s back down their throats with a decent goal, after that the away fans seemed to leave him alone, obviously petrified to gee him up further.

Talking to him afterwards, BBC man Jamie Reid commented to Yann that 4 points from two games against fancied clubs was a great return, Yann summed up the determination in this squad by saying a great return would have been 6 points, it seems to me this team are quietly confident in their ability to do well in this league, on the performances so far I see noting to dispute that.