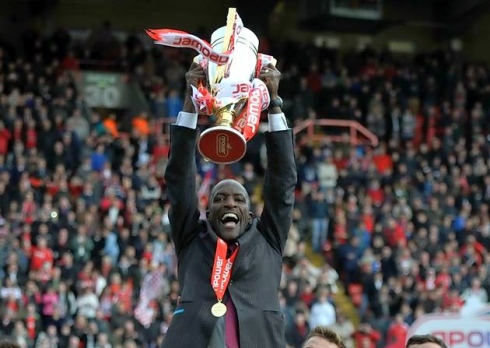 On a day where everyone was in party mood in South London, there was a small matter of a match to take place. Sure enough, Charlton provided the perfect send-off for the Valley faithful as a champions’ performance sunk Hartlepool.

Pre-match displays from the Red Devils and some stunning vocal performances from Martin Toal, Rose Jang and Victoria Stanyon set the tone for an emotional day.

The party threatened to be spoilt however, as Gary Liddle saw his well-struck volley sail marginally over the bar. At the other end, top scorer Bradley Wright-Phillips fired just wide.

Captain Johnnie Jackson was forced off through injury, and was replaced by Danny Haynes. A minute later, the visitors who took the lead.

A corner from the left was met by Peter Hartley, whose shot found its way into the net. The goal gave the away fans, including several hundred smurfs, reason to celebrate an otherwise throwaway fixture.

Spurred on by a crowd of over 26,000, the home side threatened to find a way back into the game almost immediately, but again Wright-Phillips failed to keep his composure and Charlton went into the interval a goal down.

The second half was one to savour, as free-flowing football and chances at both ends led to a thoroughly entertaining final 45 minutes of football at The Valley for another campaign.

An improved performance in the latter period saw Charlton draw level. Danny Hollands met Rhoys Wiggins’ corner, and as the ball was volleyed home you sensed that wouldn’t be the last of the action.

Scott Flinders had to be alert to deny Yann Kermogant, but was unable to do anything about Danny Haynes’ header shortly afterwards. The Reds had finally moved into the lead.

But as so often has been the case this campaign, there was more. Step forward Kermogant to seal the win.

His sublime and expertly placed volley sailed over Flinders into the far right of the goal. Cue ecstasy around the ground, a truly memorable goal to go with a truly memorable day. And all three goals coming in front of the Covered End felt like the perfect end to a perfect season.

A deflected late strike from Liddle gave the smurfs another opportunity to celebrate, but when the final whistle sounded soon afterward it was the home side who could really begin to do so.

It had been well documented that the fate of the League One title had been a forgone conclusion for three weeks or so, but after two smaller scale celebrations, the champions were finally able to get their hands on the trophy. 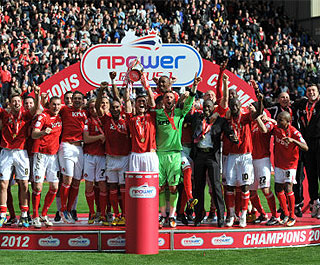 The team emerged from the tunnel and collected their medals, before proceeding to allow Jackson to hoist the trophy aloft. A momentous and unforgettable day was sealed.

Powell’s speech in front of the Covered End had even the most macho amongst us welling up, and it was a fitting end to a famous season.