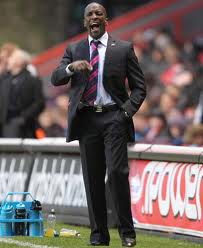 I am in an extermely lucky position, after every home game I nip down to the tunnel area and get to interview Chris Powell and some of the players, I have to pinch myself when I am down there, its me a Charlton fan outside the dressing rooms talking to players and staff, unbeliveable stuff. So once everything has calmed down I get 5 minutes with the manager, and over the course of this season each time I have met him he is getting just a little bit more impressive, when asked a question he is very measured in his reply, and always with a sense of humour, we throw the odd curve ball question at him to try and show a different side of the man, and without fail he comes back with a decent answer. I am now 100% convinced that with Chris Powell this club is heading back to the Championship after too many wasted years in the wilderness, having said that maybe the wilderness years will make us appreciate what Chris achieves all the more.

A measure of the man is that we sat down with him at the start of the season for an interview, it went very well, at the end he asked why we do not ask questions at the press conference after the game, we explained our reasons, as result Chris invited us to interview him in the tunnel after every game, win lose or draw he has always come out and spoken to me home and away. I attended the press day at the Training Ground, we did all the usual interviews, then when the tape machines were switched off Tony Hudd and myself had a 20 minute chat with Chris, dicussing subjects ranging from Football to the managers favourite items from Greggs, believe me with this man in charge this club is heading back to where we belong.

Turning our attention to the Cup game vs Carlisle, this could be a tough game after the magical night against Huddersfield, but talking to the manager yesterday he wants to get through to the 3rd round and draw one of the big boys, I expect those that play will be infected by the confidence of the first team players and will eek out a win in the end.

Looking back to Monday night, the team were fabulous, but so were the fans, the noise from around that ground made my spine tingle, amazing, well don to the fans, you played your part in a record busting night.