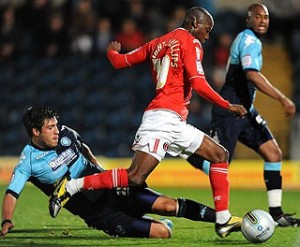 Well what a reaction fromt the team following the defeat at Stevenage, I think many Charlton fans in the aftermath were wondering what sort of reaction there would be. You really cannot argue with maximum points from what on paper looked a possibly tough week, the Carlisle performance was superb, byt he time they had their man sent off they were 3-0 and like a boxer on the ropes waiting and hoping the trainer would throw in the towel, they followed that up with a superb 1st half performance at Wycombe, there were a few nervous moments in the 2nd half once Wycombe had go the goal, but the team braved it out, and then last Saturday the demolition of Hartlepool, one of the most clinical attacking displays I have witnessed from a Charlton side, its fair to say Hartlepool were never in the game.
One of the features of the past 3 games has been the lethal form of Bradley Wright Phillips, on Tuesday night he joked about punching manager Chris Powell for taking him off when stuck on 2 goals, and on Saturday he grabbed another brace, Chris Powell sensibly left the hitman on for the full 90 minutes to give him every chance of claiming the match ball, I suspect that hat trick is not far off, amazingly Bradley has never scored a senior hat trick.

Of course behind every goal poacher has to be a team to provide that killer pass, Danny Hollands sublime pass for Bradleys 2nd goal at Wycombe was superb, not even the despairing tackle from former Charlton player Grant Basey was going to stop him scoring, even Ben Hamer has an assist to his credit, but for my mind the work of Rhoys Wiggins has been huge, both of BWP’s goals at Hartlepool were laid on by Rhoys Wiggins, Wiggins has problably been the clubs most improved player since the start of the season, his understanding with Johnnie Jackson on the left hand side has blossomed, and surely Rhoys cannot be far away from a Welsh Cap.